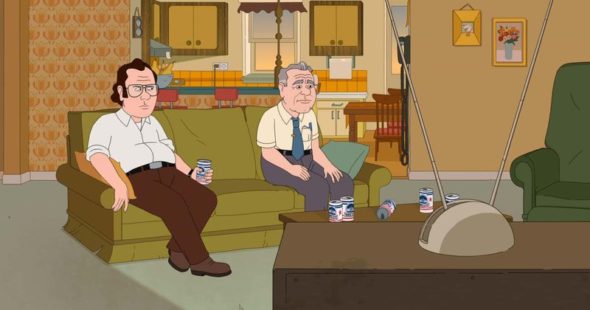 Do you long for the 1970s with the fourth season of the F Is for Family TV show on Netflix? As we all know, the Nielsen ratings typically play a big role in determining whether a TV show like F Is for Family is cancelled or renewed for season five. Netflix and other streaming platforms, however, collect their own data. If you’ve been watching this TV series, we’d love to know how you feel about the fourth season episodes of F Is for Family here.  *Status Update Below.

An animated black comedy series on Netflix, F Is for Family comes from creators Bill Burr and Michael Price. Burr voices the male lead, Francis X. Murphy (aka Frank), as well as Father Patt. The voice cast also includes Laura Dern, Justin Long, Haley Reinhart, Debi Derryberry, Sam Rockwell, Mo Collins, Trevor Devall, and Phil Hendrie. The sitcom unfolds in 1970s Pennsylvania, where embittered Korean War veteran Frank plies his trade as a baggage handler at Mohican Airlines and, along with wife Sue (Dern) is raising his family. The three Murphy kids, Kevin (Long), Maureen (Derryberry), and Bill (Reinhart), are coming of age in the days where you could smoke cigarettes inside, and parents didn’t hover over their kids.

What do you think? Which season four episodes of the F Is for Family TV series do you rate as wonderful, terrible, or somewhere between? Do you think that F Is for Family on Netflix should be cancelled or renewed for a fifth season? Don’t forget to vote, and share your thoughts, below.

*10/2/20 update: F is For Family has been renewed for a fifth and final season by Netflix.

We don’t watch any cartoons on TV & don’t support Netflix!