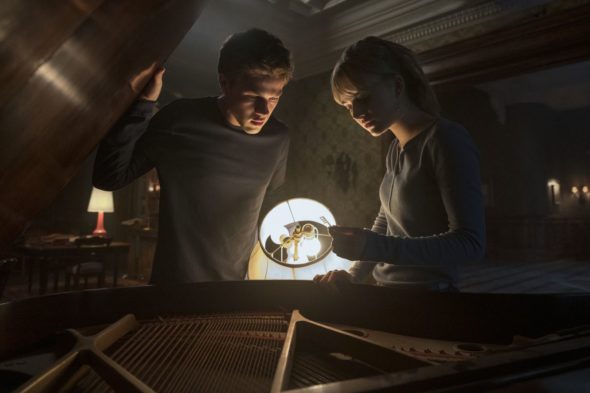 Are there some doors that shouldn’t be opened in the first season of the Locke & Key TV show on Netflix? As we all know, the Nielsen ratings typically play a big role in determining whether a TV show like Locke & Key is cancelled or renewed for season two. Netflix and other streaming platforms, however, collect their own data. If you’ve been watching this TV series, we’d love to know how you feel about the first season episodes of Locke & Key here. *Status Update Below

A Netflix supernatural horror drama, Locke & Key stars Darby Stanchfield, Connor Jessup, Emilia Jones, Jackson Robert Scott, Emilia Jones, Laysla De Oliveira, and Griffin Gluck. The story follows the Locke family — mother Nina (Stanchfield); eldest son Tyler (Jessup); daughter Kinsey (Jones); and Bode (Scott), the youngest son. The family moves into their mysterious ancestral home in Massachusetts after the gruesome murder of the clan’s patriarch, Rendell (Bill Heck). The kids discover that the house has magical keys that give them a vast array of powers and abilities. Unknown to them, a devious demon also wants the keys, and will stop at nothing to attain them.

What do you think? Which season one episodes of the Locke & Key TV series do you rate as wonderful, terrible, or somewhere between? Do you think that Locke & Key on Netflix should be cancelled or renewed for a second season? Don’t forget to vote, and share your thoughts, below.

Great show, fun and dramatic. I would like to see a season two.