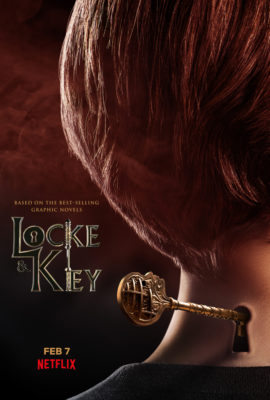 Based on the graphic novels by Joe Hill and Gabriel Rodriguez, the supernatural drama follows the three Locke children and their mother as they ” move into their ancestral home, Keyhouse, which they discover is full of magical keys that may be connected to their father’s death. As the Locke children explore the different keys and their unique powers, a mysterious demon awakens — and will stop at nothing to steal them.” The cast includes Darby Stanchfield, Jackson Robert Scott, Connor Jessup, and Bill Heck.

Locke & Key is set to debut on Netflix on February 7th.

What do you think? Have you read Locke & Key? Will you watch the Netflix series?