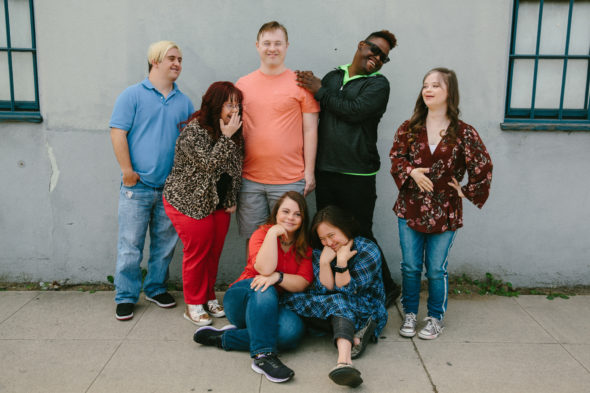 What’s in store for the end of Born This Way? A&E just announced the premiere date for the TV show’s series finale.

The docuseries “provides an intimate look at a diverse group of young men and women with Down syndrome as they pursue their passions and lifelong dreams, explore friendships, romantic relationships and work, all while defying society’s expectations.”

The series finale of Born This Way debuts on A&E on December 18th at 9 p.m. ET/PT.

Check out a preview and read  more info below:

New York, NY – December 3, 2019 – A&E Network’s critically-acclaimed, Emmy-winning docuseries “Born This Way” celebrates the Christmas season with a one-hour series finale special, “A Very Born This Way Christmas,” premiering Wednesday, December 18 at 9pm ET/PT. The special will celebrate the spirit of the holidays as Elena, John, Megan, Rachel, Sean, Steven, Cristina and Angel and their families gather to spread cheer and reflect on their personal growth across the four seasons of the series. Viewers can watch a preview of the Christmas special at https://youtu.be/HQDG5uoZZFw and catch up on the entire series ahead of the finale at aetv.com.

Ahead of the linear series finale special, aetv.com will premiere six all-new digital shorts, “Born This Way: Moving Forward,” on Friday, December 13. Across the digital episodes, the cast will tackle important topics such as advice for families who have a loved one with Down syndrome, entrepreneurship within the disability community, a sibling’s take on having a brother or sister with a disability, and the importance of people with disabilities participating in the democratic process. Episodes will also explore how the series came to be, and its impact on the Down syndrome community. The digital series will also air on A&E’s YouTube Channel and on the “Born This Way” Facebook page.

“Born This Way” provides an intimate look at a diverse group of young men and women with Down syndrome as they pursue their passions and lifelong dreams, explore friendships, romantic relationships and work, all while defying society’s expectations. The series also gives a voice to the parents, allowing them to talk about the joy their son or daughter brings to their family, and the challenges they face in helping them live as independently as possible.

What do you think? Do you watch Born This Way? Will you watch the series finale?

I am so very sad to hear that you are stopping the show. This show is about real life. How a person with down syndrome gets through life. They are real people, super smart, very intelligent, and very creative. I worked for a food store, and we had employees with that disability that worked there. This show is very close to my heart. For some reason a lot is babies, girls boys, adults, teenagers find comfort in my. I am like a magnet to them, as they are too me. Please rethink this decision please. All that is going on… Read more »

I’m gonna miss this so much. It’s one of my favorites.

I will miss this show. These kids were so very inspirational to everyone. I personally do not have children, but if I had, I’d want to know these kids to know that I’d be honored to have had any of them as mine or been honored if I had had a child born with Downs Syndrome. I just really loved each and everyone on these special humans!
I will be watching the finale and shedding tears!

Yes I would watch it it’s the best show ever about people with Downs Syndrome, to bad they had to cancel it very disappointed about that!

I have Down syndrome and cannot wait to see the final episode. I’m so sad it is ending but I am glad they are coming together one last time.