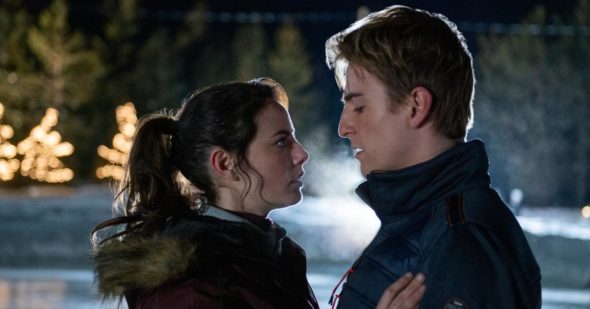 Is the audience cheering after the first season of the Spinning Out TV show on Netflix? As we all know, the Nielsen ratings typically play a big role in determining whether a TV show like Spinning Out is cancelled or renewed for season two. Netflix and other streaming platforms, however, collect their own data. If you’ve been watching this TV series, we’d love to know how you feel about the first season episodes of Spinning Out here. *Status update below.

A Netflix drama series, Spinning Out stars Kaya Scodelario, Willow Shields, Evan Roderick, David James Elliott, Sarah Wright Olsen, Svetlana Efremova, Amanda Zhou, Mitchell Edwards, Kaitlyn Leeb, Will Kemp, and January Jones. The show revolves around a figure skating Olympic hopeful who battles her personal demons and faces drama both on and off the ice. Kat Baker (Scodelario) is an up-and-coming, high-level single skater who’s about to turn in her skates after a devastating fall took her off the competition track. When Kat seizes an opportunity to continue her career as a pair skater with a talented and wealthy bad-boy partner named Justin Davis (Roderick), she risks exposing a fiercely kept secret that could unravel her entire life.

What do you think? Which season one episodes of the Spinning Out TV series do you rate as wonderful, terrible, or somewhere between? Do you think that Spinning Out on Netflix should be cancelled or renewed for a second season? Don’t forget to vote, and share your thoughts, below.

*2/4/20 update: Netflix has cancelled Spinning Out so, there won’t be a second season.

I think it was an amazing serie, there’s no series like this one (ice skating)and with an aproach of the problems (diseases, bullying, etc) I think this shold be a TOP series to renew instead of some others with no interest at all. Hope Netflix or some other network bring a new season.

I loved Spinning Out and really hope someone else picks it up if Netflix doesn’t!!!

I Loved this show. Why do good shows get cancelled. I need another season!!!

I’m so mad this show was cancelled! It was an amazing show and couldn’t wait for more and now I hear it’s cancelled!

I loved Spinning Out. Why do Netflix keep cancelling shows. It’s really frustrating. First Anne With an E, now this. Plus where’s season 13 of Heartland? Ggrrrr

I love this show. I had to force myself to turn it off. It is very compelling. Sometimes I felt the timeline was rushed. I would have liked to see more development of the relationships.

The language is FILTHY and distracts from the acting and story line. Who has such a potty mouth? The writers? Producers? We are VERY disappointed in David Elliot! Do his wife and children approve of his being on a set where such foul language is used over, and over, and over? I have NEVER heard the ‘f’ word used so many times in one program. I hope that this terrible show is cancelled! Should it be renewed we won’t be watching!

Are you 12 years old? This is acting, imitating real life. If you don’t want to watch real acting, go watch a show meant for someone who has the mindset such as yours. Maybe Peppa Pig is more your speed.