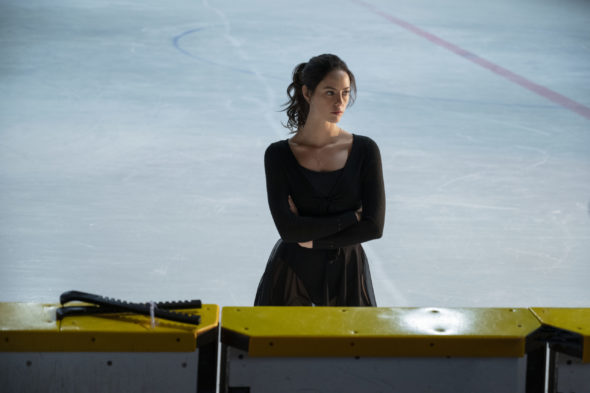 Spinning Out is taking a spill on the ice after just one season. Netflix has decided not to renew the figure skating drama for a second season. The series hit the streaming service on January 1. The streaming service also handed a one and done cancellation to Soundtrack as well.

Deadline shared the following about Spinning Out on Netflix:

“Created by former competitive figure skater Samantha Stratton, Spinning Out starred Kaya Scodelario as Kat Baker, a high-level figure skater who is about to turn in her skates after a disastrous fall takes her off the competition track. When Kat seizes an opportunity to continue her career as a pairs skater with a talented bad-boy partner, Justin Davis (Evan Roderick), she risks exposing a fiercely kept secret that could unravel her entire life. She splits her time between the ice rink, working as a waitress and living with her family in the nearby working-class town of Hawkley, Idaho. Kat’s mother (January Jones) is a former figure skater who has raised Kat, and younger sister, Serena (Willow Shields), on her own. Fueled by a desire to prove that she can cut it as a pairs skater, Kat keeps her eye on the prize – facing daunting odds to realize her Olympic dream.”

While Netflix does not release ratings for its programming, the series scored a 9.64 in our on-site viewer voting.

What do you think? Did you watch Spinning Out? Would you have watched season two?

Yes I would have watch a season 2. I love the the show.

We found this series to be very entertaining and interesting with a great STORY!! We are very disappointed with Netflix for canceling the series before its natural conclusion. In total agreement with Kathy, above or below!

Even worse for Anne with an E!! It’s still all about the money … not just entertainment. 🙁

I found this series to be very entertaining. I am very disappointed with Netflix for cancelling the series before its natural conclusion.