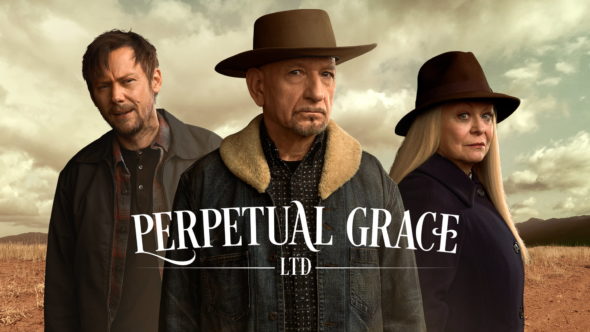 Perpetual Grace, LTD will not return for a full second season, but fans will not be left to wonder what would have happened after a cliffhanger ending. EPIX wants to give the series a proper ending with closure for the fans, per Deadline.

The EPIX series, which stars Ben Kingsley and Jimmi Simpson, is described as follows:

“The ten-part Perpetual Grace, LTD premiered in June 2019. It stars James (Simpson), a young grifter, as he attempts to prey upon Pastor Byron Brown (Kingsley), who turns out to be far more dangerous than James suspects. It turns out Byron and his wife Lillian, played by Jacki Weaver, known as Pa and Ma, have used religion to bilk hundreds of innocent people out of their life savings.”

The number of episodes the series will be given to wrap things up on the network was not revealed. Talks are on-going now, according to reports. But, Steve Conrad had something different to say on social media. Could this spell trouble for the series’ return? Stay tuned for more developments.

also, under these terms, never going to happen https://t.co/I9uyE1VIbt

What do you think? Did you see season one of Perpetual Grace, LTD? Are you glad the network is allowing the series to close things out properly for the fans?

Unbelievable. A clever, interesting, funny, witty, well casted series is completely dismissed by the powers that be. It is their responsibility to market or publicise the show. But because of their failure to do so AND their failure to back themselves, we are left without closure.
Sir Ben and Queen Jacki deserve better–as do the remainder of the cast–we will never see a better one in a tv series.
Shame on Epix.

I absolutely loved this show. I loved patriot just as much. It makes me really sad that these productions were not given the proper advertising they deserved. These were my 2 favorite shows ever! Period. Steve, for the love of god, please don’t stop. You make great entertainment. I will never stop recommending them to everyone I meet. Please don’t stop being funny. Never stop casting your brother (he is truly amazing). Keep bringing in those serious Aussie actors.. It’s wayyy funier when the serious guys deliver the subtle punchline. You have mastered this. DONT GIVE UP. You have an… Read more »

Story had a lot of bizarre twists. It keeps u interested

Perpetual Grace Ltd. is the best television show ever, so of course it should be renewed. It’s extremely rare to come across a show where everything aligns perfectly – the cinematography is second to none, the dialogue/acting just superb and I could go on for hours. Ok, it didn’t reach a wide audience, but Breaking Bad wasn’t popular for the first few seasons. At the VERY LEAST give it another full season. We lost Patriot and the team at Elephant deserve more than that – again. Epix, do not give up on this masterpiece

Adore Perpetual Grace! Please don’t cancel on us fans. “Get it”.