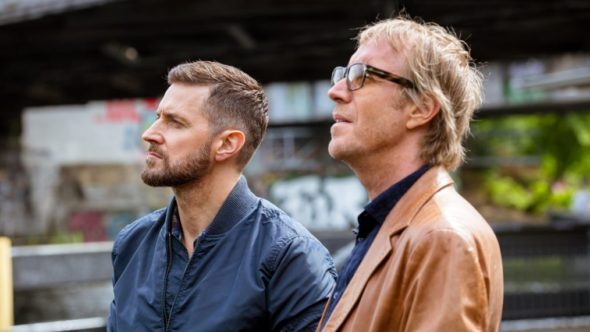 Espionage drama Berlin Station has shut down after three seasons. The EPIX spy series has been cancelled.

Berlin Station stars Michelle Forbes, Richard Armitage, Richard Jenkins, Rhys Ifans, Leland Orser, Ashley Judd, Keke Palmer, and Ismael Cruz Córdova who joins as the CIA agent Rafael Torres. James Cromwell joined season three on a recurring basis. The series centers on the CIA’s installation in Berlin and season three unfolds during an 11-day timespan. In Eastern and Central Europe, Chief of Station Valerie Edwards (Forbes) guides her team through the high-stakes relationship between Russia, the United States, and its vulnerable NATO allies. The Kremlin could be involved in some foul play with the potential to wreak havoc with international relations.

The third season of Berlin Station finished airing on Sunday, February 17th and the traditional ratings aren’t available for the series. According to Deadline, Epix boss Michael Wright said that, “we’re truly on so many platforms that it takes about three to four weeks after we run the last episode to get all the data.”

It seems that the show’s numbers have now been tabulated and, given the large cast and European locales, a fourth season didn’t make financial sense for the channel.

EPIX’s only other remaining scripted series, Get Shorty, has already been renewed for a third season. The channel has new series on the horizon however. They include Batman prequel Pennyworth, Perpetual Grace LTD, Godfather of Harlem, and Belgravia.

What do you think? Do you like the Berlin Station TV show? Are you sorry that there won’t be a fourth season of this spy series?

This series really needs to be finalised with a final season ,to bond with characters only to have it axed is very poor form I had doughts with the first few episodes only to find it excellent very soon after ,you shoot in Europe you pay to finish I fought the viewing has declined .

Seriously you all couldn’t have did season 4 and put more closure to the series?????
Very disappointed with Epix. Really going to cancel my subscription to your network!!!!

fabulous show one of the best so sorry no next season

Sad they have left us up in the air with this series. Great character development and wonderful cast. Shame on you Epix for letting us down on this one

I really liked this series. They should not have canceled a great series. Very disappointing.

Shame they cancel good shows and renewed crummy ones .. Get shorty PennyWorth horrible and perpetual boring

Best series I have seen ever. I am done with Epix.

No season 4 sucks. They could at least run a final movie to tie it all up.

Time to drop epic. Two great shows that aren’t subtitled. Berlin Station and Britannia. Will they cancel it too

I’m very upset Berlin Station has been cancelled. This was one of the better shows on TV ! What a shame. I really wish the management would rethink their decision.

I am very sorry that Berlin station serial was suspended. I like this serial very much. I hope for a new decision to renew this serial.