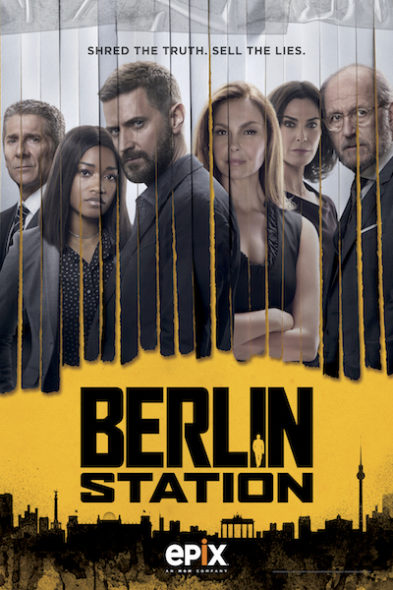 An EPIX spy drama, Berlin Station stars Richard Armitage, Rhys Ifans, Leland Orser, Michelle Forbes, Richard Jenkins, Mina Tander, Ashley Judd, and Keke Palmer. The series centers on Daniel Miller (Armitage). As part of an investigation into a whistleblower, Miller goes to the CIA’s Berlin station on a secret mission to discover the source of the Thomas Shaw leaks. There amidst the other agents and administrators, he discovers a sordid trail that leads all the way back to Washington D.C.

Since they are not part of the Nielsen ratings system, it is difficult to predict whether EPIX will cancel or renew Berlin Station for season three. Flying blind, I expect a renewal. EPIX is trying to build up its programming slate and along with Graves this is one of its first two original series. Still, I’ll keep an eye on the trades and update this page with breaking developments. Subscribe for free updates on any Berlin Station cancellation or renewal news.

What do you think? Do you hope the Berlin Station TV show will be renewed for a third season? How would you feel if EPIX cancelled this TV series, instead?

Berlin Station is important as a window into events that governments and spy agencies cannot reveal through normal news channels. The story line keeps viewers involved and drawing connections between real life and what they are watching.

glad it’s coming back! enjoyed all the twists and turns in this well written spy show!

Berlin Station is an excellent show. We enjoy the var ious characters and hope to see Season 3 in 2018

Let this one be renewed, great show.

One of the more interesting story lines on tv. Hope more people get a chance to see this show. Good acting and love be Berlin setting and pacing.