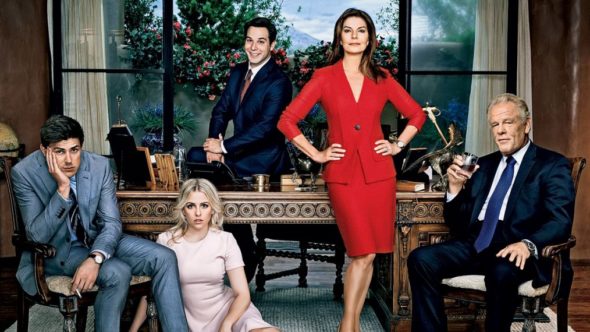 TV show description:
The Graves TV show is a political comedy from creator Joshua Michael Stern. The story centers on Richard Graves (Nolte), a former President of the United States, his wife Margaret (Ward), and their children Olivia (Yorke), and Jeremy (Lowell).

Twenty-five years after the fact, President Richard Graves has an attack of conscience regarding the legacy of his two terms as POTUS. Now, he is embarking upon a mission to right all the wrongs he perpetrated from this nation’s “bully pulpit,” the Oval Office.

Richard’s epiphany comes just as Margaret decides the time is right for her to pursue her own political career. Now, she’ll have to campaign — all the while handling her husband as he turns over a new leaf.

Richard and Margaret’s daughter, Olivia, is a stereotypical self-destructive socialite. Meanwhile, their son Jeremy, who is just back from serving in Afghanistan, is trying to establish a new identity, apart from his famous, dysfunctional family.

Together and apart, the Graves family must deal with people serving their own agendas — from distraction and corruption to temptation and even loyalty. Will they stick it out together — or to one another? Stay tuned.

Series Finale:
Episode #20, “Spark Meet Gasoline”
Former President Richard Graves (Nick Nolte) faces the menacing nuclear missile he commissioned years ago and makes amends the only way he can. Just as Margaret (Sela Ward) is about to clinch the Senate race, events careen wildly off the rails. (Courtesy of EPIX.)
First aired: December 10, 2017

What do you think? Did you enjoy the Graves TV series? Should EPIX have cancelled or renewed Graves for season three?

I just saw this show on Hulu and it’s amazing! Can’t believe they cancelled it! I wish another network would be smart enough to pick it up and continue it!

Loved this show!! It was different and funny. And yet they keep putting on reality show spin-offs!! ugh

Been waiting for the return. CRAP!!!

Finally we get a show that is totally different; a show that has a fresh new subject matter. Graves was not the typical single plot with the same five people. The shows that have over worked a simple issue of a completely meaning less scheme. Graves covered the gamete of topics, ranging through everyday problems, but allowing the viewer to see that even “Ex Presidents” can enjoy the highs of life’s roller coaster. It’s nice watch a show without “Canned” laughter. You were allowed to decide for yourself if you should feel happy, sad, or somewhere in the middle. I… Read more »