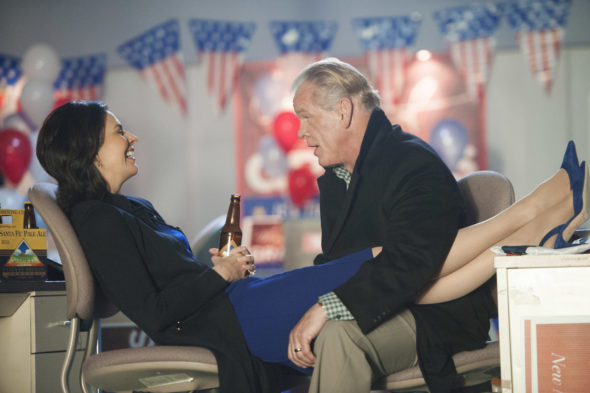 Is Richard Graves still on the road to redemption? Has the Graves TV show been cancelled or renewed for a third season on EPIX? The television vulture is watching all the latest cancellation and renewal news, so this page is the place to track the status of Graves, season three. Bookmark it, or subscribe for the latest updates. Remember, the television vulture is watching your shows. Are you?

A political comedy from creator Joshua Michael Stern, airing on EPIX, Graves stars Nick Nolte, Sela Ward, Skylar Astin, Heléne Yorke, Chris Lowell, Callie Hernandez, Ernie Hudson, Roger Bart, and Nia Vardalos. The story centers on Richard Graves (Nolte), a former President of the United States, his wife Margaret (Ward), and their children Olivia (Yorke), and Jeremy (Lowell). Twenty-five years after the fact, President Richard Graves has an epiphany and decides to clean up his legacy, just as Margaret decides the time is right for her to pursue her own political career. Now, she’ll have to campaign — all the while handling her husband as he turns over a new leaf.

EPIX isn’t part of the Nielsen ratings, so it’s difficult to predict whether they’ll cancel or renew Graves for season three. Flying blind, I think it will score a third season. Along with Berlin Station, Graves was one of the first two original scripted series on the premium cable channel, which has since added Get Shorty. It’s clear they’re trying to build up their programming slate, so it makes sense for them to give it every chance. Still, that’s just speculation, so I’ll keep an eye on the trades and update this page with breaking developments. Subscribe for free updates on any Graves cancellation or renewal news.

What do you think? Did EPIX cancel its Graves TV show too soon? If it was up to you, would Graves be cancelled or renewed for season three? Sound off, below.

I love this show, just found it! I don’t remember it ever being advertised!

I just found this show. I don’t even remember it being advertised! I am loving this show! Totally bummed that it’s not continuing!

Damn straight they did guess I will be cancelling my subscription to this movie channel now.

So disappointed Graves was cancelled really enjoyed the show. Wish you would bring it back.

This show gives me pleasure and hope. Hope that people can change and become more empathetic and willing to make and correct wrongs. The cast is awesome, everyone is individually and together a pleasure to live with. I would really like to see this show wrapped properly in a 3rd season.