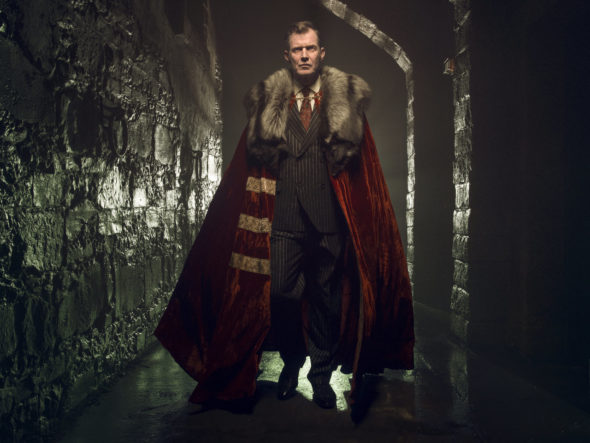 How is business for Alfred Pennyworth? Has the Pennyworth TV show been cancelled or renewed for a second season on EPIX? The television vulture is watching all the latest cancellation and renewal news, so this page is the place to track the status of Pennyworth season two. Bookmark it, or subscribe for the latest updates. Remember, the television vulture is watching your shows. Are you?

Since they are not part of the Nielsen ratings system, it is hard to predict whether EPIX will cancel or renew Pennyworth for season two. Since it is a Batman prequel, it has something of a built-in audience — assuming those fans care enough about it to subscribe to EPIX. Flying blind, I think Pennyworth is more likely to be renewed for a second season, but that’s just speculation. While we wait for information, I’ll keep an eye on press releases and the trades, so subscribe for free Pennyworth cancellation or renewal news alerts.

10/31/19 update: EPIX has renewed Pennyworth for a second season.

What do you think? Are you glad that the Pennyworth TV show has been renewed for a second season? How would you feel if EPIX had cancelled this TV series, instead?

Can’t wait to see next season on dvd?

I love Pennyworth, and I’m not a comic book fan. I love the character development , the quirkiness of the cast ( especially the Beth and her sister) and story line.. so happy it’s been renewed for another season

Absolutely renew! Great TV ala The Saint or The Avengers.
Intelligent and interesting. Rare for today’s tv.

Renew!!! One of the greatest things I’ve seen on telly, up there with GOT, peaky blinders and all the rest… brilliantly made and so original!! In a league of it’s own

Absolutely renew this show. I have not been intrigued since Game of Thrones, and for a weekly show, this is one I really look forward to. I get tired of hearing everything about ratings from a channel not available on everyone’s box. Promote this show more and sell some merchandise and see where it goes. This is a must-see!

Pennyworth is the best new series I’ve seen in a long time and definitely deserves a season 2. One thing, the show needs the Sykes sisters, so the show’s creators need to figure way to get them released from prison.

Please renew it .Its a great show !! Love the dark humor.