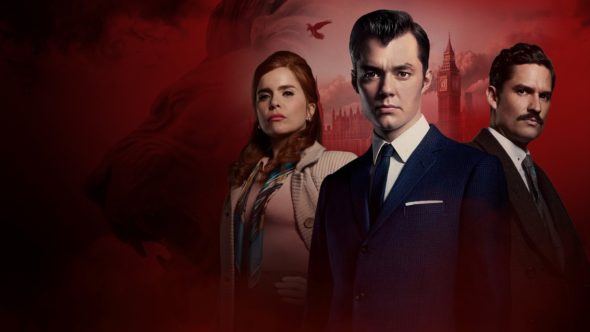 TV show description:
From executive producers Bruno Heller and Danny Cannon, the Pennyworth TV show is a Batman prequel, based on the DC Comics characters created by Bob Kane and Bill Finger. The series follows Bruce Wayne’s eventual butler Alfred Pennyworth (Bannon), but exists in another universe than the Gotham series.

The story unfolds in 1960s London, where former British SAS soldier Pennyworth founds his security firm. While Alfred is still struggling to reconcile who he used to be with the killer he had to become, he meets billionaire Thomas Wayne (Aldridge).

Confident, deliberate, and methodical, Wayne hails from the United States’ East Coast. He falls in love with secret government operative Martha Kane (Paetz) — whom he will go on to marry, and together they’ll bring Bruce Wayne into the world. For now, though, they’re fighting fascism on behalf of the No-Name League.

Alfred’s circle includes his old friends from the service, Dave Boy (Fletcher), an alcoholic, and Bazza (Bennett), who is something of a ladies’ man. Not all the faces around him are friendly ones, including the acid-tongued Bet Sykes (Faith) and her colleague, Lord Harwoodoo (Flemyng). The two are members of the Raven Society, which is agitating for a fascist revolution.

While Thomas Wayne’s privileged background makes them unlikely partners, despite Alfred’s initial reluctance, the two are soon working together.

Series Finale:
Episode #30 — Highland Wedding
As the city further descends into a lullaby-induced chaos, Alfie and Martha break into L7 to save Lucius–and the rest of the world.
First aired: November 24, 2022.


What do you think? Do you like the Pennyworth TV series? Should this HBO Max TV show have been cancelled or renewed for a fourth season?

It’s bloody fantastic! Alfred you are the Man!

I Love This Show!!!!
I definitely think that it deserves to continue. The story is just beginning and it needs to keep going. Please Please Please do not cancel this show ‼️‼️‼️‼️‼️‼️

I love this show. It is really good, and I hope it get renewed

This is a interesting show , so that we can find out how Alfred and Bruce get together . Please continue the show