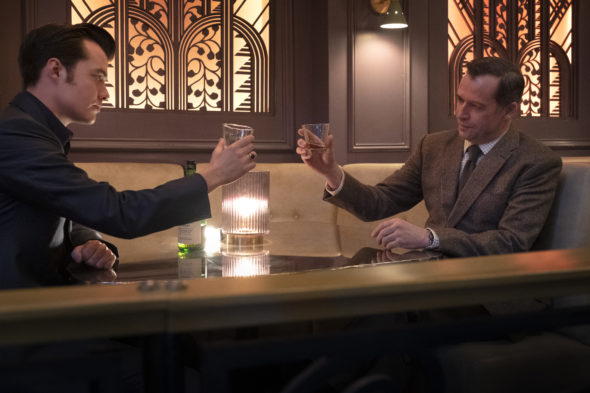 How far will this prequel series take us? Has the Pennyworth TV show been cancelled or renewed for a third season on EPIX? The television vulture is watching all the latest cancellation and renewal news, so this page is the place to track the status of Pennyworth, season three. Bookmark it, or subscribe for the latest updates. Remember, the television vulture is watching your shows. Are you?

Unless they decide to publicize viewership, it is difficult to predict whether EPIX will cancel or renew Pennyworth for season three. EPIX is a small premium channel and doesn’t report ratings. Since this series is connected to the Batman mythos, I’m leaning toward a renewal.  I’ll keep my ears open and an eye out for news, and will update this page with breaking developments. Subscribe for free alerts on Pennyworth cancellation or renewal news.

10/17/21 update: Pennyworth has been renewed for a third season.

What do you think? Do you hope the Pennyworth TV show will be renewed for a third season? How would you feel if EPIX cancelled this TV series, instead?

Great series, hope it doesn’t get cancelled and season 3 is on our screens soon.

I would be devastated if the series were cancelled! It is a fantastic show that I’ve been recommending to all of my friends. Please renew!

Please, please let there be a third season of Pennyworth! Season 2 Episode 10 ends with a baby girl born to Martha and Thomas Wayne. A girl? There’s lots of plot room for the birth of Bruce Wayne, our Gotham hero Batman.

Its a great show I love the dialogue between the characters, even though the last episode of season 2 was farfetched.

I love this series… So much fun. Great villian, that the heroes are brilliantly imperfect men & women makes it even better. The two sisters, the mother, all the characters including the lead, of course, are delicious.