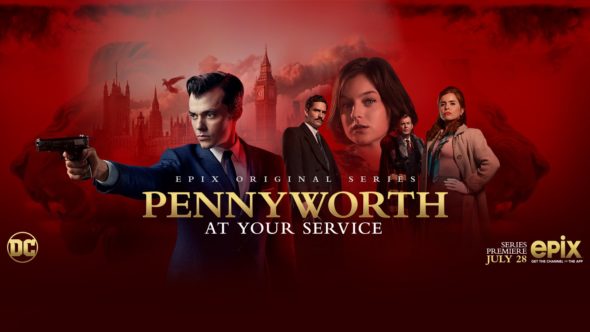 Is the first season of the Pennyworth TV show on EPIX worth your time? As we all know, the Nielsen ratings typically play a big role in determining whether a TV show like Pennyworth is cancelled or renewed for season two. As a subscription service though, EPIX collects its own data. If you’ve been watching this TV series, we’d love to know how you feel about the Pennyworth season one episodes. We invite you to rate them for us here. *Status update below.

What do you think? Which season one episodes of the Pennyworth TV series do you rate as wonderful, terrible, or somewhere between? Should EPIX cancel or renew Pennyworth for a second season? Don’t forget to vote, and share your thoughts, below.

Good show, especially if you liked the recent TV series that portrayed Pennyworth as more than a doddering old English butler. Too graphic for network TV, I would pay (again)_ to see this.

I love this show.. It should be renewed, again and again.

This is an awesome show, very well acted and just enough action to keep us interested. I enjoy learning the “backstory” about Alfred and how he knew so much to teach Batman as a child to adulthood. Well done!!

Love the show pennyworth bring it back.

its a great show and needs to be renewed.. so much garbage on tv walking dead lol- and that show goes on and on and we have to worry about great shows like Pennyworth.. its not right

Bring my mate Alfey back or I’ll have to have a word with the BAT !,,,

I love this show I look forward to it every week I hope that they have a second season I am hooked.