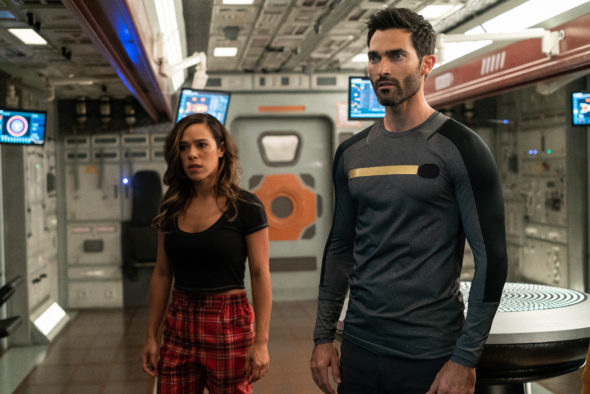 Is the first season of the Another Life TV show on Netflix worth a second? Usually, the Nielsen ratings play a big role in determining whether a TV show like Another Life is cancelled or renewed for season two. Netflix and other streaming platforms, however, collect their own data. If you’ve been watching this TV series, we’d love to know how you feel about the Another Life season one episodes. We invite you to rate them for us here. *Status update below.

What do you think? Which season one episodes of the Another Life TV series do you rate as wonderful, terrible, or somewhere between? Should Netflix cancel or renew Another Life for a second season? Don’t forget to vote, and share your thoughts, below.

*10/30/19 update: Netflix has renewed Another Life for a second season.

Absolutely loved this series will hope like hell that season 3 will come. This series has left a lot open in the exploration of new planets and the bond humans will make or not make with other species.

Surprisingly enjoyable and extremely intense! Huge Science Fiction critic here, and was taken back by the countless negative reviews. A story about extremely young/ extremely smart astronauts that are taken way out of their comfort zone and are forced to face the reality of life and death. Lead by a hardcore seasoned veteran commander that has past her youth and settled down, only to be chosen to lead this daring mission while struggling with relating to the younger generation and yet having to make the right choices. Netflix did a good job casting and leaving openings (no spoilers) for more… Read more »

True to the way people act in the real world, its just in space. Check your own work place and see how realistic it is.

Please create a season 3 for another life

This is one of the worst shows I’ve ever seen. Sophomoric dialogue, bad science, hideous characters, stupid drama. Don’t renew it. Save yourselves.

Loved it more as it went on please ease dont leave us hanging bring on season 2!!!

U got ur season 2 now we’re going for Season 3. Lol
But if you loved it that much why have you missed season 2 #just saying