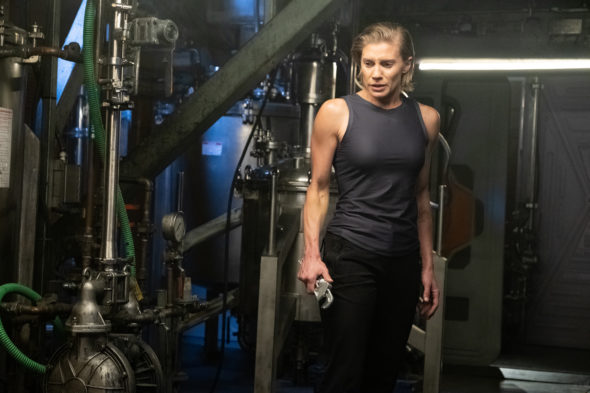 TV show description:
From creator Aaron Martin, the Another Life TV show is a science-fiction drama. The series centers on Niko Breckinridge (Sackhoff), an astronaut on a quest for alien intelligence.

As commander of the Salvare space exploration ship, Niko leads her young crew to discover the origins of an alien artifact, which has been sending signals to Pi Canis Majoris. A hothead, Ian Yerxa (Hoechlin) is a former commander, who lost the post to her.

As Niko’s courageous right hand, the principled Cas Isakovic (Ludlow) is a steadfast ally. Also part of the crew is William (Anderson), a holographic interface of a sentient Artificial Intelligence (AI) entity. William is far more advanced than a robot. He is more of a new life form and is able to tap into humanity’s collective knowledge.

Niko is married to scientist Erik Wallace (Chatwin), a member of the body dedicated to seeking out intelligent life in the universe — United States Interstellar Command. He gets the news that Niko has been called up for duty, just as they and their young daughter, Jana (Renna), are set to move.

The Salvare’s mission is supposed to be six months long may. Fraught with danger as it is, it may well turn out to be a one-way trip.

Series Finale:
Episode #20 — D-Day
As the Achaia close in, the crew moves quickly to create a new weapon and save Earth. The time has come for the heroic to make the ultimate sacrifice.
First aired: October 14, 2021.


What do you think? Do you like the Another Life TV series? Should this Netflix TV show have been cancelled or renewed for a third season?

The second season literally takes how inept these community college drama queens are at being astronauts, and turns it into a plot point to “explain away” how absurdly stupid the casting, dialogue writing and overarching story line are. Unbelievable.