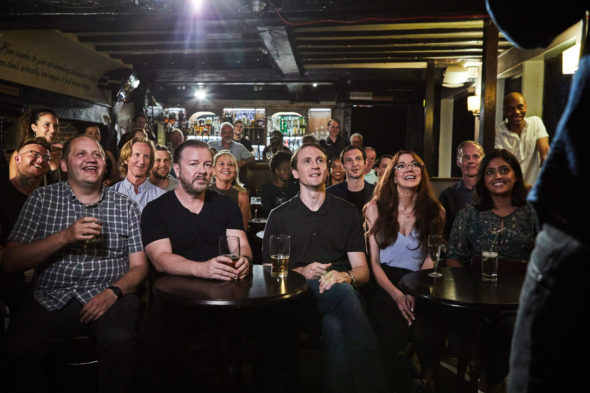 TV show description:
From creator and star Ricky Gervais, the After Life TV show centers on the newly widowed Tony (Gervais). Once upon a time, Tony had a great life, but after the death of his wife, Lisa (Godliman), he decides to change up his approach to living.

After he considers committing suicide, Tony instead decides to live long enough to teach the world a lesson. He intends to mete out this punishment by saying and doing whatever pleases him.

Tony’s circle includes his dad (Bradley) and his nurse (Jensen); brother-in-law, Matt (Basden); and best friend Lenny (Way). Although Tony considers this new way of dealing as something akin to a superpower, his self-centered lifestyle leaves his near and dear both bewildered and concerned. Now they’re all out to bring back the Tony they know and love.

Series Finale:
Episode #18
An interview with a sick child hits Tony hard. Later, he makes a decision about Lisa’s insurance money and joins his friends at the town fair.
First aired: January 14, 2022.

What do you think? Do you like the After Life TV series? Should this Netflix TV show have ended with its third season?

Love love love it, every minute of it resonated with me, and if I wasn’t crying I was laughing….truly a brilliant show, I love ricky, he’s so funny and knows how to paint a picture with his words that everyone can understand.

I do not want your game.

I’m satisfied. The show did a brilliant job of illustrating a decent man, with understandable, and even valid, anger issues, going through both a touching and quite hilarious grieving process that resulted [SPOILER ALERT] in a beautiful transformation. I see no need for a second season.