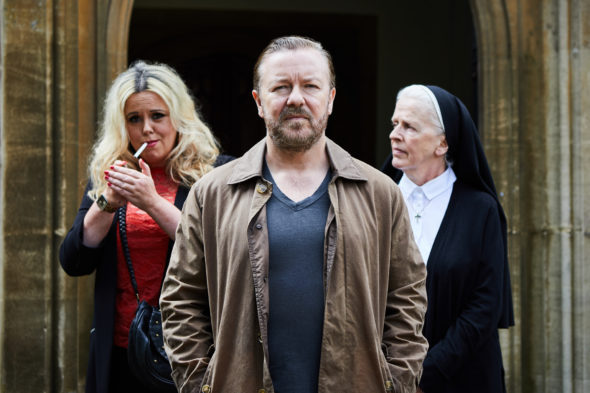 How long can Tony keep living this way? Has the After Life TV show been cancelled or renewed for a second season on Netflix? The television vulture is watching all the latest TV cancellation and renewal news, so this page is the place to track the status of After Life, season two. Bookmark it, or subscribe for the latest updates. Remember, the television vulture is watching your shows. Are you?

A dark Netflix comedy, After Life stars Ricky Gervais, Kerry Godliman, Tom Basden, Tony Way, David Bradley, and Ashley Jensen. After his wife Lisa (Godliman) dies, Tony (Gervais) considers suicide but instead decides to punish the world with his new superpower — doing and saying anything he pleases. Now his friends and family are trying everything to convince him to revert to his old, kinder ways.

Unless they decide to publicize viewership, it is difficult to predict whether Netflix will cancel or renew After Life for season two. For now, I’ll keep an eye on the trades and press releases and update this page with breaking developments. Subscribe for free After Life cancellation or renewal alerts.

4/3/19 update: Netflix has renewed the After Life TV show for a second season.

What do you think? Are you glad that the After Life TV show has been renewed for a second season? How would you feel if Netflix had cancelled this TV series, instead?

Great show! Happened to find it while scrolling Netflix. Please renew! This I fantastic adult comedy.