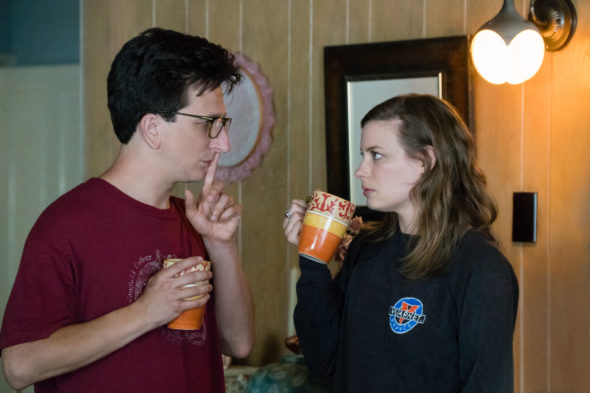 What does the future hold for Mickey and Gus? Has the Love TV show been cancelled or renewed for a fourth season on Netflix? The television vulture is watching all the latest TV cancellation and renewal news, so this page is the place to track the status of Love, season four. Bookmark it, or subscribe for the latest updates. Remember, the television vulture is watching your shows. Are you?

A Netflix romantic comedy-drama, Love stars Gillian Jacobs, Paul Rust, and Claudia O’Doherty. Unfolding in Los Angeles, this TV series takes an honest look at modern relationships, through the experiences of Gus (Rust) and Mickey (Jacobs). The third season kicks off with the pair in a committed relationship. Together, they have to navigate all the ups and downs, because this is only the beginning.

Since we already know its fate, we can stream this third and final season, without wondering whether Love is cancelled or renewed for season four. Still, I’ll keep an eye on the trades for any news and update this page with breaking developments. Subscribe for free Love cancellation, renewal, or spin-off alerts. Now pardon me, but I must fly. I have dinner plans.

What do you think? Is the Love TV show ending at the right time? Were it up to you, would Love be cancelled or renewed for season four?

When I searched to find when season four of Love might come out, I was disappointed to read that it is canceled after season 3:( But now that I think about it, where can Gus and Mickey go from that last super tender funny moment when they snuck out to the balcony and married? So…I guess I would say season 3 is a good place to end! Super entertaining, thanks!

Careful with the spoilers there.

Im very upset with this show being canceled…Every time i find a show that is awesome and we can relate to it gets canceled….Well netflix this is disappointing….sigh

Actually, I think it is ending at the right time. To keep it going, as much as I would love that, would only see them, with all they have built together, succumb to the bickering and pressures of going forward together, and separate. Espically if kids, or lack of, were to become an issue.

Keep it going for as long as possible. This is one of my favorite shows on Netflix.