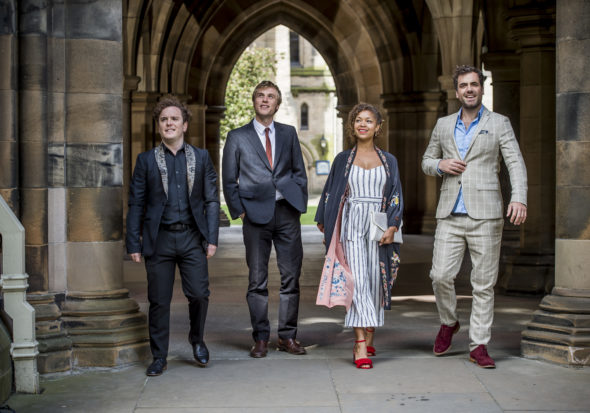 Has Dylan reached the end of his journey? Is the Lovesick TV show cancelled or renewed for a fourth season on Netflix? The television vulture is watching all the latest TV cancellation and renewal news, so this page is the place to track the status of Lovesick, season four. Bookmark it, or subscribe for the latest updates. Remember, the television vulture is watching your shows. Are you?

A comedy streaming on the Netflix paid subscription platform, Lovesick stars Johnny Flynn, Antonia Thomas, Daniel Ings, Joshua McGuire, Hannah Britland, and Richard Thomson. Originally entitled Scrotal Recall for its first season on UK Channel 4, Lovesick centers on 20-something Dylan (Flynn). When learns he has Chlamydia, Dylan has to notify all of his past sex partners. He decides to view his diagnosis and mission to contact his old girlfriends as a “positive journey of self-discovery.” Evie (Thomas), his best friend, and Luke (Ings), his worst influence, are there for him, much as they have been through his long, fruitless search for true love.

Unless they decide to publicize viewership, it is hard to predict whether Netflix will cancel or renew Lovesick for season four. British series tend to have both fewer episodes per season and fewer seasons overall, so ending it after the third season isn’t unimaginable. For now, I’ll keep an eye on the trades and update this page with breaking developments. Subscribe for free alerts on Lovesick cancellation or renewal news.

What do you think? Do you hope the Lovesick TV show will be renewed for season four? How would you feel if Netflix cancelled this TV series, instead?

This show has been in my queue for ages. I’m so glad I finally watched it. I binged and watched all 3 seasons in like a 5 days! Excellent show and so funny! Season 4 pretty please!!

So entertaining! Laugh out loud funny! Tv is crap PLEASE BRING ON SEASON 4!!!!!

I would be properly pissed if season 4 was canceled. It’s my favorite shoe. Bring. It. Back.

Love the show, Characters and actors! Another season please!

I literally just started watching movies and films staring Johnny Flynn, this series is so fun and insightful. I love the character growth. please don’t cancel this show.

Season 4 please! Such as good and funny show. Netflix please get the ok to show it too!

Discovered this bloody marvellous series last night and I’ve been bingeing on it ever since (currently half way through series three) It’s very funny, touching, heartwarming and, in parts, incredibly sad – essentially a whole gamut of emotions in every episode. I’m absolutely loving it – and honestly can’t understand why it isn’t/wasn’t a total smash hit, it certainly deserves to be. I now want a Dylan of my own! 🙂 I’d love to see a series 4 – I’m enjoying watching Luke develop as an actual feeling human – and I’d love to see his ‘happily ever after’ too!… Read more »

It’s my favorite series on Netflix. I love every character. Great comedy writers. Bring. It. Back.

What a delight!!! We’re going through withdrawal and we literally just watched the last episode of Season 3. Funny, smart, great characters. More, please!

I’m right there with you, love the show, and I’ve grown so attached to the characters! If I could write a season 4, Evie would go back to Mal, Dylan would end up with Cara, and Angus would finally get his happily-ever-after with Holly, they seemed so good together at first! and Angus deserves some happiness.