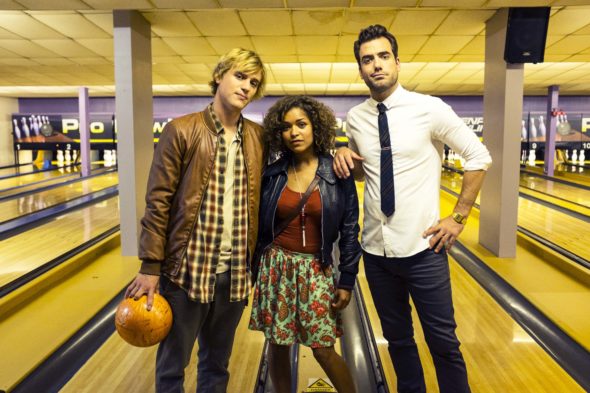 TV show description:
A British sitcom from creator and writer Tom Edge, the Lovesick TV show originally premiered on UK Channel 4 in October of 2014 as Scrotal Recall. When the British network didn’t commission a second season, Netflix took on production without Channel 4 and retitled the TV series, prior to the second season release.

The comedy centers on 20-something Dylan (Flynn). When he is diagnosed with Chlamydia, Dylan has to notify all of his past sex partners. In each episode, he tracks down a new woman from his STI (sexually transmitted infection) contact list. The action switches between the present and flashbacks to important times during past relationships.

A romantic at heart, Dylan decides that he will look at his diagnosis and mission to contact his old girlfriends as a “positive journey of self-discovery.” Evie (Thomas), his best friend, and Luke (Ings), his worst influence, are there for him, much as they have been through his long, fruitless search for “The One.”

Throughout Lovesick, Dylan, Evie, and Luke try to help each other figure out love and life, as they look at the past and the present, while considering the future.

What do you think? Do you like the Lovesick TV series? Should this TV show be cancelled or renewed for another season on Netflix?

I love Lovesick! This is one of my favorite series. I hope this show is renewed. Please don’t cancel it.