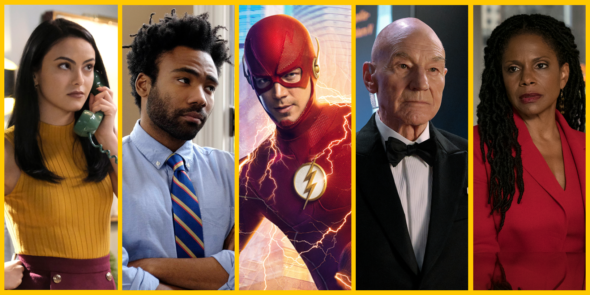 Here’s a list of TV shows that aired (or were expected to air) during the 2022-23 season (roughly September 2022 through August 2023) but won’t be back for the 2022-23 season. Not finding a show that you believe has been cancelled? Check our other season lists or our network, cable, and streaming show status pages.

This list will be updated as the season progresses, so feel free to bookmark and check back. If we’ve missed something, please let me know.

Atlanta (FX)
A comedy-drama created by star Donald Glover, this show centers on a music manager and a rapper as they navigate Atlanta’s rap scene. It was announced in advance that season four would be the end of the show.

Batman: Caped Crusader (HBO Max)
An animated show about the caped crusader from Bruce Timm (Batman: The Animated Series), J.J. Abrams, and Matt Reeves, this series was ordered but was cancelled before it got off the ground.

Beauty and the Beast (Disney+)
A prequel that would have focused on Gaston (Luke Evans) and LeFou (Josh Gad) from the 2017 movie,
this show was cancelled (at least for now) due to scheduling delays and conflicts.

Chesapeake Shores (Hallmark Channel)
It was announced that the sixth season of this family drama series would also be the show’s last.

Daily Pop (E!)
A daytime series that covers pop culture and celebrity news, this show ran for five and a half years before being cancelled.

Dead to Me (Netflix)
A dark comedy about two grieving women (Christina Applegate and Linda Cardellini) who bond while in therapy. Season three is the end.

Derry Girls (Netflix)
A British comedy about five teens growing up in Northern Ireland, this series ends with season three.

Field of Dreams (Peacock)
The streaming service ordered this series which would have been based on the 1989 sports fantasy drama movie, which starred Kevin Costner. Michael Shur was to write the project. Plans for the series were cancelled but it’s said to be shopped elsewhere.

The Flash (The CW)
The network’s longest-running superhero show ends with its ninth season.

The Good Fight (Paramount+)
A sequel to The Good Wife TV show, this political and legal drama follows the lives of attorneys Diane Lockhart (Christine Baranski) and Maia Rindell (Rose Leslie) following a financial scam and scandal. Season six is the end.

The Late Late Show with James Corden (CBS)
In April 2022, Corden revealed that he would depart the talk show after eight and a half years in 2023.

The Marvelous Mrs. Maisel (Prime Video)
Midge Maisel (Rachel Brosnahan) leaves the stage with this dramedy’s fifth and final season. The show revolves around a 1950s wife and homemaker with aspirations of making it in standup comedy.

Million Dollar Island (NBC)
A Survivor-like competition series featuring 100 contestants, this show was planned for the 2022-23 season. It was cancelled before casting could fully get underway.

My Glory Was I Had Such Friends (Apple TV+)
An adaptation of Laura Dave’s bestselling novel, the order for this series was cancelled after Jennifer Garner exited the project.

Never Have I Ever (Netflix)
A coming-of-age comedy series, this show follows the life of a modern-day first-generation Indian American teenage girl (Maitreyi Ramakrishnan). Season four will end the story.

New Amsterdam (NBC)
This medical drama series follows the efforts of Dr. Max Goodwin (Ryan Eggold) and his co-workers at New Amsterdam Medical Center to make a difference. Season five is the end.

The Owl House (Disney Channel)
Created by Dana Terrace, this fantasy series follows a teenage girl who befriends a witch and becomes her apprentice. The story ends with a third season of three specials.

Power Book V: Influence (Starz)
This Power spin-off was ordered to series with Larenz Tate starring as politician Rashad Tate. Plans for the series were cancelled.

Riverdale (The CW)
A dark and dramatic take on the characters from Archie comics, this series ends with its seventh season.

Servant (Apple TV+)
A psychological thriller series, this show revolves around a Philadelphia couple in mourning. Season four is the end.

Snowfall (FX)
Revolving around the crack cocaine epidemic of the 1980s, this crime drama was renewed for a sixth and final season.

Star Trek: Picard (Paramount+)
Starring Sir Patrick Stewart, this sci-fi series wraps with its third season, which will reunite Jean-Luc Picard with his Enterprise crew from Star Trek: The Next Generation.

Stranger Things (Netflix)
Set in the 1980s, this sci-fi horror series revolves around mysteries and supernatural events in the town of Hawkins, Indiana. It ends with season five.

The Umbrella Academy (Netflix)
A superhero series, this show was based on the comic book series which was written by Gerard Way and illustrated by Gabriel Bá. It wraps with season four.

Workin’ Moms (Netflix)
This Canadian comedy series follows a group of women as they cope with the struggles of being working mothers. They say goodbye after seven seasons.

Your Honor (Showtime)
Starring Bryan Cranston as a New Orleans judge, this drama’s story comes to a close with its second season.

They should add the rest of flash and supergirl so people could actually finish the series. As well as the rest of CW dc series. It sucks to watch a series and you can not watch till the end and they just leave you hanging. This sucks Netflix

Please don’t cancel Nightly Pop .. THIS IS THE BEST SHOW !!!! We’re so sad

I binge watched the new show The Endgame and I have heard that they are already cancelling it. It was an awesome new show. It should definitely continue!

why does it seem that Netflix cancels everything good?

With you on that.

Chesapeake Shores Please do not end! It seems that all good family shows everyone wants to end them. This is a great show.

I am going to miss Chesapeake Shores. Anyway to bring it back?

I Am NOT Happy to Hear that New Amsterdam will Not Be Coming Back!!!! This is my all my all time favorite show. It really saddens me. I wish the cast and crew great thing’s moving forward in their In journey. God Bless You All.

Hell, NA jumped the shark 2 seasons ago, and when downhill faster than anything else I can remember.

I don’t know what ‘ jumped the shark’ means but I also feel that New Amsterdam really ran off the rails the last two seasons. I got sick of all the politics that they started to put into every single episode. And, this was a show I NEVER missed. Keep your politics to yourselves and give us good TV. Thank you

When a show “jumps the shark” it means that the show has run it’s course. The term comes from an absurd episode of “Happy Days” where Fonzy quite literally jumps over a shark. That was when audiences said okay this has gone too far into weirdness.

One of the best