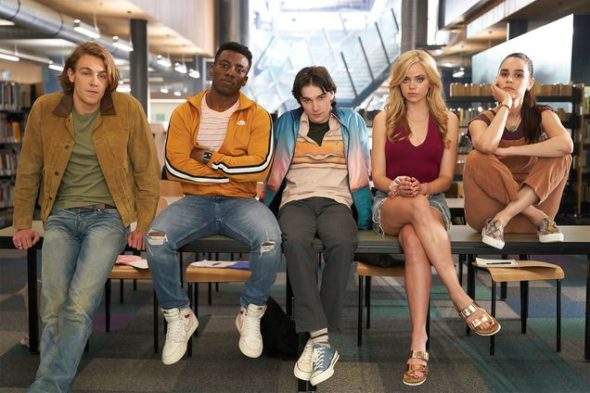 Another show has met its maker, and Peacock is the culprit. The streaming service has cancelled the One of Us Is Lying TV series after two seasons.

The story follows five Bayview High students who are given detention — cheerleader Addy (Cochrane), baseball pitcher Cooper (Uche), overachiever Bronwyn (Tejada), drug dealer Nate (Grootel), and gossip forum owner Simon (McKenna). One of them dies due to a fatal allergic reaction, and the other four all have a motive for the classmate to die. When it’s revealed that the death was not an accident, the investigation begins.

One of Us Is Lying was Peacock’s first original series order in August 2020, and the first season’s eight episodes dropped on October 21, 2021. The series was renewed for a second season three months later, and the new episodes were released last October 22nd.

Deadline reports that, while Peacock execs were happy with the series creatively, the show’s viewership wasn’t big enough to justify ordering a third season.  The series is produced by Universal Studio Group, and the word is that the company is looking for a new home for the series so that it could potentially have a third season elsewhere.

Teen drama Vampire Academy has also been cancelled by Peacock.

What do you think? Have you watched the One of Us Is Lying TV series on Peacock? Are you disappointed that the show has been canceled? Would you watch a third season on another outlet?

F**kkkkkk , they ended with something hanging after credits…. F**kkkkk
I hope Netflix buys it …

Really liked this show. One of us is lying. Why are the good shows canceled and lousy shows kept? Would like to see it on another streamer. Hope company finds new partner for next season