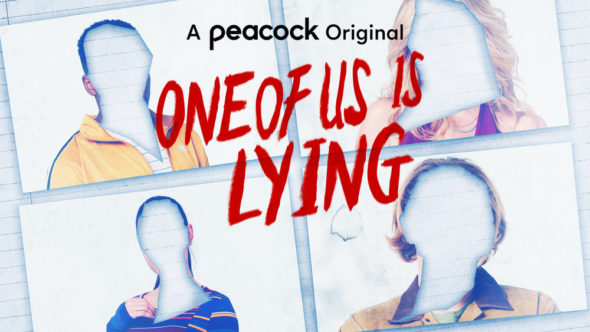 One of Us Is Lying is coming to Peacock. The streaming service has ordered the new mystery drama series, which is for the young adult set. Marianly Tejada, Cooper van Grootel, Annalisa Cochrane, Chibuikem Uche, Barrett Carnahan, Jessica McLeod, and Melissa Collazo star in this upcoming series.

The story follows a group of teens as they try to figure out who killed one of their classmates in a day of detention gone wrong. Peacock revealed more about the series in a press release.

“Peacock has picked up young adult mystery drama ONE OF US IS LYING to series with an eight-episode order. Based on the bestselling novel of the same title by Karen M. McManus, ONE OF US IS LYING is the story of what happens when five high schoolers walk into detention and only four make it out alive. Everyone is a suspect, and everyone has something to hide.

ONE OF US IS LYING is produced by UCP, a division of Universal Studio Group. Darío Madrona (co-creator of Elite) will serve as showrunner and executive producer. Erica Saleh (Evil) wrote the pilot and will executive produce. Saleh is represented by ICM, Writ Large, and attorney Jared Levine. The series is also executive produced by John Sacchi and Matt Groesch of 5 More Minutes Productions who developed the pilot. Filmmaker and actress Jennifer Morrison directed and produced the pilot.”

What do you think? Will you check out the One of Us Is Lying series when it debuts on Peacock?