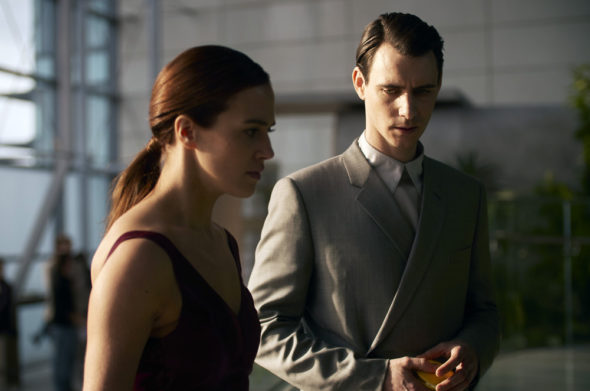 The sci-fi series about a so-called perfect society won’t be returning for a second season. The Peacock streaming service has cancelled the Brave New World TV show after one season of nine episodes.

Developed by David Wiener and Grant Morrison and based on the classic dystopian novel by Aldous Huxley, the Brave New World series stars Jessica Brown Findlay, Harry Lloyd, Alden Ehrenreich, Hannah John-Kamen, and Joseph Morgan. The story imagines a utopian society that has achieved peace and stability through the prohibition of monogamy, privacy, money, family, and history itself. As citizens of New London, Bernard Marx (Lloyd) and Lenina Crowne (Findlay) embark on a vacation to the Savage Lands, where they become embroiled in a harrowing and violent rebellion. Bernard and Lenina are rescued by John the Savage (Ehrenreich), who escapes with them back to New London. John’s arrival in the New World soon threatens to disrupt its utopian harmony, leaving Bernard and Lenina to grapple with the repercussions.

While Peacock has opted not to move forward with a second season of Brave New World, the story might still continue. UCP, the studio behind the series, is planning to shop the sci-fi series to other outlets.

“There will not be season two of Brave New World on Peacock,” the streamer said in a statement to Deadline. “David Wiener created a thought-provoking and cinematic adaptation. We’re grateful to the cast and crew who brought this world to life. We look forward to telling more stories with David in the future.”

Want more? Check out our lists for additional cancelled TV shows. Our status pages are here.

What do you think? Have you watched the Brave New World TV series on Peacock? Would you watch a second season if the series landed on another channel or service?

I loved this show. I would watch season two on another service if the quality remained the same and the storyline went somewhere interesting.

I thoroughly enjoyed season 1 of BNW and was looking forward to seeing the second season when I found this sad news, that Peacock TV had decided to cancel it. I really hope someone else picks it up

I definitely DID want a Season 2 of BNW…hopefully, someone will pick it up!

I watched Brave New World. I wanted to like it. I didn’t. The series felt like a manual transmission car that was stuck in second gear