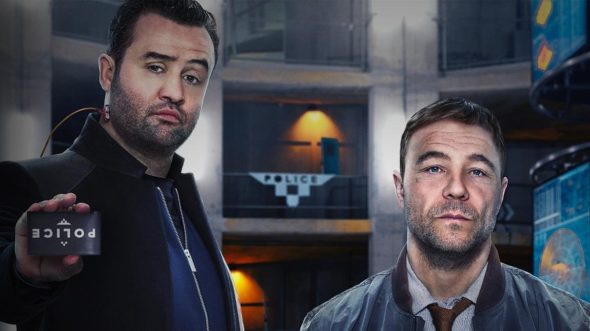 Code 404 is coming soon to Peacock. The streaming service has announced a premiere date for the new British police dramedy and a trailer has also been released. Daniel Mays, Stephen Graham, and Anna Maxwell Martin star in the series which has six half-hour episodes in its first season. The show originates on Sky One in the UK and has not been renewed for a second season, as yet.

Peacock revealed the following about the imported series in a press release.

“In this near-future comedy we meet partners Major and Carver, the best of the best at the Special Investigation Unit, an elite undercover police team. When Major is shot dead at a covert arms bust gone wrong, Carver is plagued by guilt. He blames his burgeoning friendship with Major’s wife for taking his eye off the ball at a crucial moment, resulting in his partner’s death. Which is why he’s so shocked when Major turns up a year later, raring to pick up things exactly where they left off. Carver learns that Major’s been resurrected using pioneering AI, but, budgets being what they are, the software still had a few glitches. So while Major 2.0 might have even more ego than his previous version, the reboot seems to have left his judgement, ability and large parts of his memory behind, making him far more of a liability dead than he ever was alive.

CODE 404, a new buddy detective comedy set in London in the near future, will launch on Peacock on Thursday, October 1. We are excited to share all six episodes of this Peacock Original with you, which offers a hilarious and refreshing spin on the classic crime-fighting duo.”

Check out the Code 404 trailer below.

What do you think? Do you plan to check Code 404 on Peacock next month? Do you generally enjoy scripted police series?

Peacock is just using shows from its UK arm – Sky – to prop it up. The problem is that Sky shows are low rated trash.

I got a bad feeling that Code 404 will be copied by an American version in the near future and I can save the $5. it will cost per month.

Peacock so-called originals are mainly just UK shows that aired last year or earlier this year in the UK and can been seen on free streaming sites but Peacock wants to charge you $4.99 to watch.