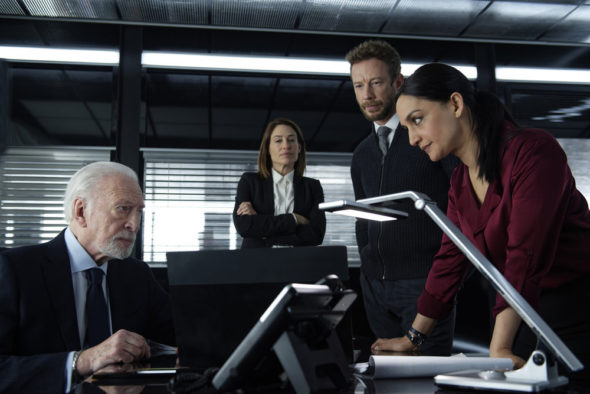 Will this drama series reach new heights? Has the Departure TV show been cancelled or renewed for a second season on Peacock? The television vulture is watching all the latest cancellation and renewal news, so this page is the place to track the status of Departure, season two. Bookmark it, or subscribe for the latest updates. Remember, the television vulture is watching your shows. Are you?

Streaming on the Peacock subscription service in the United States, the Departure TV show stars Archie Panjabi, Christopher Plummer, Kris Holden-Reid, Rebecca Liddiard, Tamara Duarte, Mark Rendall, Peter Mensah, and Sasha Roiz. After passenger plane Flight 716 vanishes, recently widowed Kendra Malley (Panjabi), a brilliant TSIB investigator, is called in by her former boss and mentor, Senior TSIB Manager Howard Lawson (Plummer), to lead the investigation. With the whole world watching, Kendra and her team race to find the missing aircraft and locate possible survivors. They must battle through a host of suspects and possible motives to determine what really happened to Flight 716 — and to stop it from happening again.

There’s no need to wonder if Peacock will cancel or renew Departure for season two. The show has already been renewed for a second season on Peacock and channels around the world. Production on season two began in Canada in September 2020. I’ll keep my ears open and an eye out for news, and will update this page with breaking developments. Subscribe for free alerts on Departure cancellation or renewal news.

What do you think? Are you glad that the Departure TV show has been renewed for a second season on Peacock? Would you have been upset if it had been cancelled?

So happy Departure is returning for a second season!!! I absolutely love it!! ❤️

So happy Departure is returning for a second season. Enjoyed the premise and the talented actors.

I enjoyed Rebecca Liddiard’s performances in Houdini & Doyle, Frankie Drake Mysteries, and this one Departure. She is Canadian, but her British accents are dead on.

Excellent series. Looking forward to the second season. Hope it’s as good as the first

I enjoyed this series! Glad to see there will be a second!

I just loved Departure Season 1. I can not wait for the announcement of the beginning of season 2

Enjoyed this show, looking forward to a second season. Will watch anything with Archie Panjabi.

Departure is a great show and very glad to hear it was renewed for a second season. The show is intriguing and enjoy the twists they build into the plot. The only suggestion I would have for them is they do some fact checking on the script before airing the show.

I agree about the fact checking