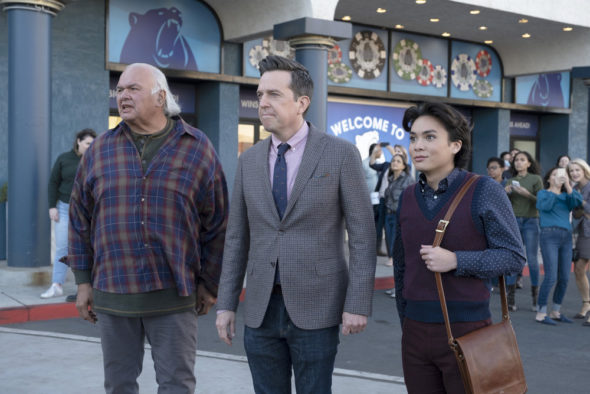 Will this town ever be the same? Has the Rutherford Falls TV show been cancelled or renewed for a second season on Peacock? The television vulture is watching all the latest cancellation and renewal news, so this page is the place to track the status of Rutherford Falls, season two. Bookmark it, or subscribe for the latest updates. Remember, the television vulture is watching your shows. Are you?

Streaming on the Peacock subscription service, the Rutherford Falls TV show stars Ed Helms, Jana Schmieding (Cheyenne River Lakota Sioux), Michael Greyeyes (Nêhiyaw from Muskeg Lake Cree Nation), Jesse Leigh, and Dustin Milligan. The story follows Nathan Rutherford (Helms) and Reagan Wells (Schmieding), two lifelong best friends. Nathan is a proud descendant of the town’s founder and he runs the town’s heritage museum. Reagan is a member of the Minishonka Nation and she has dreams of championing the history of her people. The duo find themselves at a crossroads – quite literally – when their sleepy town gets an unexpected wake-up call.

Unless they decide to publicize viewership, it is difficult to predict whether Peacock will cancel or renew Rutherford Falls for season two. Since Peacock isn’t ad-supported, it can take a chance on series it believes in, but sooner or later it comes down to production costs, versus viewership numbers. It’s not a high-profile project and it isn’t getting a lot of attention either. I think the show has a decent chance of being renewed but it could go either way. I’ll keep my ears open and an eye out for news, and will update this page with breaking developments. Subscribe for free alerts on Rutherford Falls cancellation or renewal news.

7/9/21 update: Rutherford Falls has been renewed for a second season on Peacock.

What do you think? Are you glad that the Rutherford Falls TV show has been renewed for a second season? How would you feel if Peacock had cancelled this TV series, instead?

It should be renewed it’s on if the best shows on Peacocks Stream, Hope to see them win some Emmys as well!

Hope they renew. It’s a very original show and fun to watch.

I love it, can’t wait for the second season.
Pllleeease don’t cancel.