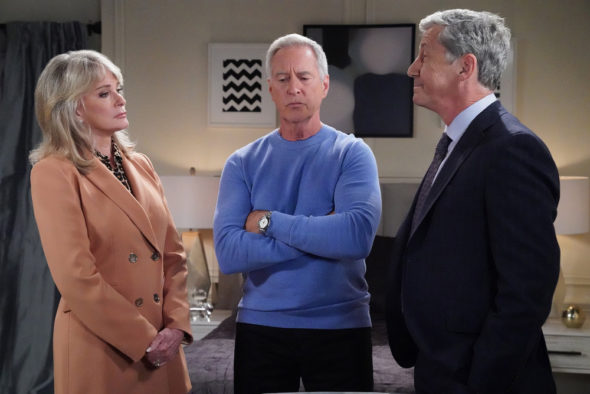 Will soap fans tune in to this spin-off? Has the Days of Our Lives: Beyond Salem TV show been cancelled or renewed for a second season on Peacock? The television vulture is watching all the latest cancellation and renewal news, so this page is the place to track the status of Beyond Salem, season two. Bookmark it, or subscribe for the latest updates. Remember, the television vulture is watching your shows. Are you?

Unless they decide to publicize viewership, it is difficult to predict whether Peacock will cancel or renew Beyond Salem for season two. Since Peacock is subscriber-supported, it can take a chance on series it believes in, but sooner or later it comes down to production costs, versus viewership numbers. Given that this Days spin-off has an established audience (and is likely to draw in past viewers), I have no doubt that Peacock will order a second season of Beyond Salem or, greenlight another spin-off of some kind. It’s also possible that Days of Our Lives could leave NBC and become a “Peacock original” at some point. I’ll keep my ears open and an eye out for news, and will update this page with breaking developments. Subscribe for free alerts on Days of Our Lives: Beyond Salem cancellation or renewal news.

4/19/22 update: Days of Our Lives: Beyond Salem has been renewed for a second season.

Days of Our Lives: Beyond Salem Cancellation & Renewal Related Links

What do you think? Are you glad that the Days of Our Lives: Beyond Salem TV show has been renewed for a second season? How would you feel if Peacock had cancelled this TV series, instead?

Loved this series! It was a cute, fun mystery for DOOL fans. It was so fun seeing all our old favorites together again. Please do a season 2!

We have really enjoyed Beyond Salem! It is campy and perfect for those of us who have loved DOOL for years. One of my favorite things about DOOL is that it knows when to poke fun at itself. I would really like another Beyond Salem installment.

Please cancel I don’t think it was right to stream this show and charge for it, there are fans of Days of our Lives that have watched since the beginning! Now you do this and make them pay for peacock when not everyone can afford it!!!