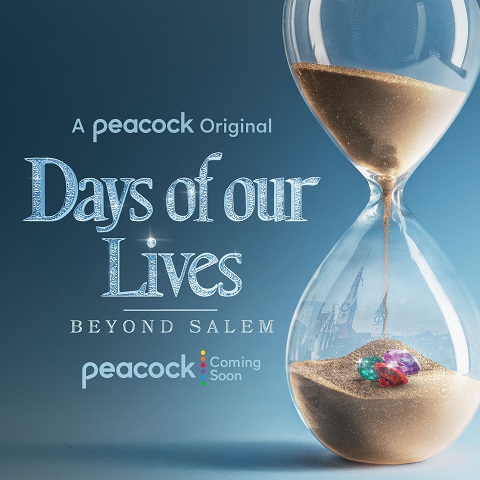 Days of Our Lives fans will soon get a peek at life beyond the town of Salem. Peacock has ordered a limited spin-off series that will bring back Lisa Rinna and feature other Days of Our Lives favorites from the past and present. Beyond Salem will feature Deidre Hall, Drake Hogestyn, Jackée Harry, and James Reynolds – among others.

“Peacock has ordered five episodes of DAYS OF OUR LIVES: BEYOND SALEM.

Over a long weekend, John & Marlena travel to Zurich, Ben & Ciara have a romantic getaway in New Orleans, Chad visits some old friends in Phoenix, and Abe, Paulina, Lani, and Eli vacation in Miami. All find themselves embroiled in a mystery involving stolen jewels which, in the wrong hands, could cause dire consequences for Salem. It’s a race against time for ISA agent Billie Reed as she crosses the globe in search of this missing treasure. Packed with all of the romance, action, drama, and surprises that only Days of our Lives can deliver, fans will spend a week with their favorite Salem supercouples and reconnect with many familiar faces along the way.

DAYS OF OUR LIVES: BEYOND SALEM is produced by Corday Productions in association with Sony Pictures Television. Ken Corday is the executive producer with co-executive producer Albert Alarr. Ron Carlivati serves as head writer.

Peacock is the exclusive streaming home to Days of our Lives. The series airs weekdays on NBC.

A premiere date for Days of Our Lives: Beyond Salem will be revealed at a later date.

What do you think? Are you a fan of Days of Our Lives on NBC? Will you watch the spin-off on Peacock?

I hope you are not only streaming on peacock. I would not mind watching on DOOL app. Would prefer on NBC. Yes, I will watch.

I can’t wait also. My day is empty without Days airing. The spin off should be wonderful. Please post all over when it will air. I would not miss it for anything. LOVE this show!!

Sorry not watching. This writer’s pets are being exclusively propped to the nines as this same writer basically has excluded long time favorites from ANY AND ALL STORIES. The writing is just awful these days. Until Days aborts the pets of Carlivati wont be watching.