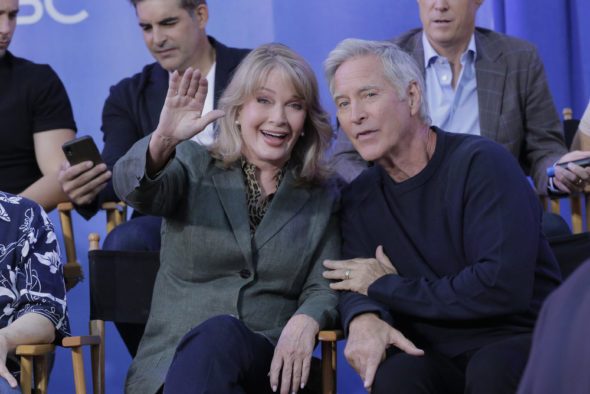 Days of Our Lives will continue on for another season. NBC has renewed the daytime soap for its 56th season. Late last year, it looked like the soap opera would come to an end when rumors of production shutting down on the series surfaced, but those rumors were quickly dashed by members of the cast. There is no telling just how long this series will remain on the air.

NBC revealed more about the renewal in a press release. Check that out below.

“Days of our Lives, the longest running series on NBC, has been renewed for a record 56th season.

Those words, which have drawn millions of eager viewers to their television sets for six decades, will remain a high point of the broadcast day with today’s renewal announcement of the multi-Daytime Emmy Award-winning series.

“From our incredibly loyal fan base to our wonderful writers, cast and crew, the enthusiasm for Days never wavers,” said Bruce Evans, Executive Vice President, Current Programming, NBC Entertainment. “We’re incredibly thrilled to bring viewers another season of a show that has cemented its place in television history and touches all generations.”

“We are most grateful to NBC for their enduring faith in the future of Days of our Lives, and we are excited to continue delivering compelling stories to our loyal family of fans into this new decade,” said executive producer Ken Corday.

Said Steve Kent, Senior Executive Vice President, Programming, Sony Pictures Television: “Ken Corday and his team continue to build on the legacy of quality storytelling and intriguing characters that connect with audiences of all ages. We are thrilled that viewers in the U.S. and around the world will be able to enjoy the award-winning ‘Days of our Lives’ for another season.”

Days of our Lives, which aired its 13,755th episode in 2019, remains a television institution. The show first premiered as a half-hour drama in 1965 and expanded to an hour 10 years later.

The show has garnered 57 Emmy Awards, including most recently 2015 and 2018’s Outstanding Daytime Drama, and 350 nominations, as well as multiple People’s Choice Awards, GLAAD Media Awards and Prism Awards.

Set in the fictitious Midwestern town of Salem, Days of our Lives airs nationally on NBC in the United States and in more than 25 countries internationally. The core families are the Bradys, Hortons and DiMeras, and the multi-layered storylines involve elements of romance, adventure, mystery, comedy and drama.

Days of our Lives is produced by Corday Productions, Inc. in association with Sony Pictures Television. Ken Corday is the executive producer with co-executive producers Greg Meng and Albert Alarr. Ron Carlivati is the head writer.”

This season is currently averaging 1.9 million viewers per episodes.

What do you think? Are you a fan of Days of Our Lives? Will you continue to watch the daytime soap?

I adore soap operas…there should be many more! Instead of all these boring talk shows, celebrity non sense & game shows please bring your viewers daytime storylines to follow, fall in love with characters & storylines. The magic of soaps will live
Forever with new viewers if you would just give it a chance instead of throwing them under the bus!

I have watched Days of our lives for over 29 years, ever since my children were born and I have loved all the drama, romance, up, downs and family unity in the storylines. Mainly the ups of course. The characters are so addictive. Refe is definitely one of my favourites and I’m sad to hear he will be leaving. Another favourite is Austin. Hopefully he will grace our screens again in season 56. Let’s not not forget Carry, who has always been a sweetheart on DOOLS. Hopefully she will return too. At the moment the saga of Sarah running of… Read more »

Soooo glad they are still on the air. Have watched them from day one. Please don’t take my sunshine away.

I’ve watched this since my mother watched it in the 60s. I’ve recorded it for years and I love it -please don’t let this stop. This is the only soap I watch… I love that the characters have grown old with me!

I love Days of Our Lives! It is the only soap I watch. I have watched it for over 50 years and will always watch it as long as it is on!

ABSOLUTELY WILL ALWAYS WATCH DOOL, been watching since I was 12 yrs old, now 56, record everyday, can’t miss a episode…DOOL is like a lays potato chip…can’t just have one! ⌛

I have been watching since day one. Truly miss Tom and Alice Horton. Love everyone on the show. Best show ever.

Days of our Lives is the Best!

I am 58 years old and I remember watching this show since I was in grammar school. I will always watch this show..