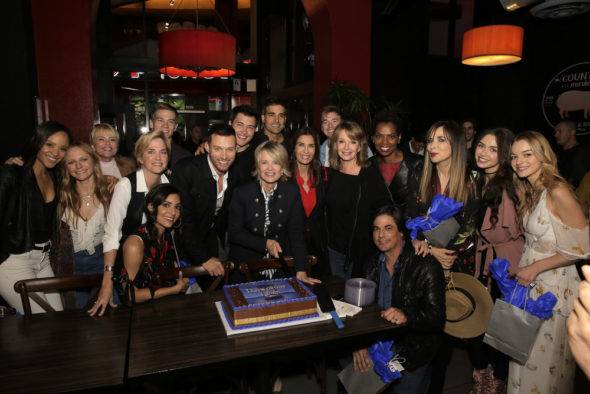 The Peacock Network is sticking around Salem. Its long-running soap opera, Days of Our Lives has been renewed for a 54th season on NBC, which will take it to the fall of 2019. The network’s sole surviving daytime drama premiered in 1965 and celebrated its 13,000th episode in January of 2017, so there’s quite a bit of TV history at stake in this renewal.

Days of Our Lives: A Look at the Ratings

The 53rd season of Days of Our Lives is currently averaging a 0.56 rating in the 18-49 year old viewer demographic and drawing a average total audience of 2.311 million viewers. Although those numbers are low — indeed, Days is the lowest rated of the four daytime dramas on broadcast network television — its Nielsen ratings performance is actually up by 1.24% in the demo and by 6.70%, in terms of total viewership.

The uptick is likely due, in part, to the latest showrunner, Ron Carlivati, as well as the return of Chandler Massey to the role of Will Horton (a character which had been killed off).

Learn more about the Days of Our Lives season 54 renewal from this NBC press release.

Those words, which have drawn millions of eager viewers to their television sets for six decades, will remain a high point of the broadcast day for a record 54th season with the announcement today of NBC’s latest renewal of the acclaimed drama “Days of our Lives.”

“We’re very excited about having more great ‘Days’ in Salem,” said Bruce Evans, Executive Vice President, Current Programming, NBC Entertainment. “Ken Corday and his team continue to tell stories with which the ‘Days’ loyal audience feels a deep connection. We congratulate them on their remarkable daytime legacy and look forward to what they have planned for the new season.”

“We’re thrilled that the sands will continue flowing through the hourglass for yet another year,” said executive producer Ken Corday. “We are most grateful to NBC and Sony for their continued support of ‘Days of our Lives.’ Buckle up because we have some exciting and compelling new stories coming to Salem this season.”

Steve Kent, Senior Executive Vice President, Programming, Sony Pictures Television, added: “Ken Corday and his cast and crew continue to reach generations of viewers through intriguing storylines and strong characters. We are proud that generations of fans, both in the U.S. and around the world, will continue to enjoy ‘Days of our Lives’ into its 54th season.”

“Days of our Lives,” which aired its 13,000th episode in 2017, remains a television institution. The show first premiered as a half-hour drama in 1965 and expanded to an hour 10 years later.

The show has garnered 52 Emmy Awards, including most recently 2013 and 2015’s Outstanding Daytime Drama, and 298 nominations, as well as multiple People’s Choice Awards, GLAAD Media Awards, and Prism Awards.

The show is currently in its 53rd season and remains a favorite among critics and fans alike. “Days of our Lives” airs nationally on NBC in the United States and in more than 25 countries internationally.

What do you think? Are you still a fan of the Days of Our Lives TV series? Did you think NBC would cancel or renew it for another season?

With this year jump into the future I am considering not watching anymore I could see maybe six months ,but a year no thanks. And there have been to many of past storylines repeats. If you want to do that your might as well start at the very beginning. I really would hate stop watching, but I’m at the end of the rope.

Please keep the show on. I have been watching it from day one.

The show is getting very boring! I have been watching for years and sbout to stop!!!!

No this show should not be canceled . I have been watching this show since 1978 I was 10 years old off the bus and run in to watch it with my mom which has been watching it since day 1 ….. This would be heart wrenching……

Please leave this show on, we enjoy watching this show. All the Drama and everything!
Watched it since the beginning.

I would very much love this soap to be cancelled as it I think it has gone on much long after 50 years. I used to watch it for 22 years but now me and many of my associates have now had more than enough of it.

yes keep days of our lives going. I have watched it for years and love it

I’m so excited that DOOL is back for another year. It’s a great show and always pushing the envelope where story is concerned. Having Ron as head writer is an even bigger blessing. I’ll keep watching for sure.

I am so happy to see that Days is renewed for another season. The writing has gotten so good this year !! YES !!!

My favorite soap, I’ve been watching since it debuted when I was 7, I’ve always only watched NBC Soaps, so it’s always disappointing when, they get terminated, so I’m very happy this one is still around. My daughter started watching it w/me when she was 7 and continues to still today at age 30!! Thank you NBC for renewing DOOL!!!

I loved Another World as well. We lost it too soon