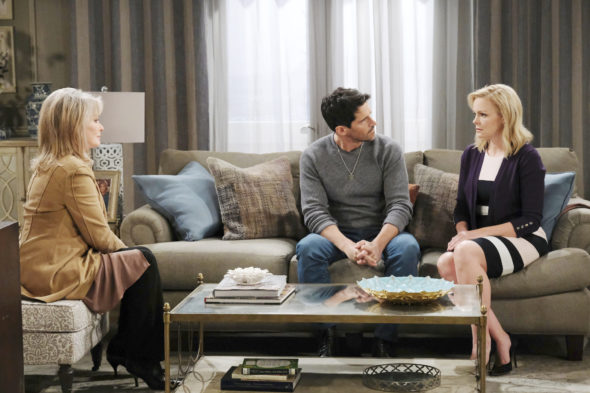 There may be plenty of turmoil ahead for the residents of Salem but the Days of Our Lives TV show is safe until 2023. NBC has renewed the daytime soap opera for two years — seasons 57 and 58. The venerable drama is currently in its 56th season and aired its 14,000th episode in December.

“We couldn’t be happier to bring our loyal fans two more seasons of Days of Our Lives and continue what has been an absolutely remarkable achievement in television,” said Michael Sluchan, Executive Vice President, Scripted Series & Kids Programming, NBCUniversal Television and Streaming. “A big thank you to Ken Corday and the cast and crew for their incredible passion for storytelling that continues to reach new generations of viewers.”

“After more than 55 years of bringing drama, adventure, and romance to screens around the world, we are thrilled and honored to carry on the Days of Our Lives legacy for another two years,” said executive producer Ken Corday. “We are thankful to NBC for their enduring commitment to the show and grateful to continue this wonderful journey with our fans for years to come.”

“We are incredibly proud of the work being done by Ken Corday, the cast and crew. They continue to tell bold stories through these iconic characters captivating audiences around the world,” said Steve Kent, Senior Executive Vice President, Programming, Sony Pictures Television. “We are thrilled to continue the legacy of Days of Our Lives and for viewers to enjoy two more seasons.”

What do you think? Do you enjoy watching the Days of Our Lives series? Are you glad to hear that it’s been renewed for two more years?

I hate the story line now I think you all should end it. I hate watching it now.

Get the Y&R writers on board to breath new life into Days. Once Bo then Hope left storyline began to crumble.,

I watch Dats on Peacock, when will season57 be available?

Been watching DOOL since day 1. I was 15 when I watched the very first episode! As long as Drake Hogestyn is on, I’ll watch until he’s off or I die; whichever comes first! Lol. Yea for 2 more years!!

I have been watching Days since the beginning and I’m happy to hear I can continue watching it for at least 2 more years. AND, I’m so happy I no longer have to be home when the show begins to watch it as I did in the 60’s.

I think they should renew days of our lives for ever it was my best episode may 9 2022 when Lani shot TR coats they need to put more
action on the show like that thumb updays of our lives.

Been following since the very first episode. My all-time favorite soap. We’ve had the good, bad and mugly. Hope that hourglass never runs out.

Now if they would just lose the boat anchor – head writer ReRon Carlivati, who has tanked the ratings with his endless parade of masks, dopplegangers, and crazy women.

Get some competent writers on board and maybe we won’t all have to be as nervous as a ***** in church the next time Days is up for renewal in 2023.

Hell, I’ll write it. I’ll even come up and possess Marlena again, if i need to!

I agree, I am about ready to stop watching. I hate the Satan story line.

A lot of us hate the story line right now ! They need to get back to reality soon or will be losing a lot of viewers. Just plan too crazy , not a good program right now just want the crazy nonsense to stop !!

This show too is my guilty pleasure. I have been watching it since 1976. I record it everyday, so in case I’m not home, I can watch it later. Tired of NBC pre-empting it whenever they feel like it. But thank God they are good about re-airing it in the middle of the night. Or Can watch it on app. Yes, some story lines are very silly and stupid. But that’s a doap opera for you.

This show has been my guilty pleasure since ’65, one shared with everyone at school before the bell rang and later with my kids. No matter how crazy it gets, I have to see what’s next (despite some of the time lags while storylines play out). They do, however, need to get a new hairstylist and a wardrobe person–badly.

Amen!!
now get Hope back and we’ll be on to something!!!

Thank goodness !!!! Days is like family to us, have watched it since day 1. THANK YOU for renewing it.

Hope new writers are onboard. I fast forward most of the show, ridiculous storylines AND what is up with the trampy outfits on Gabby and Ava….and Brady’s muscular chest exposed ALL the time, now showing it in the hospital,
gowns aren’t worn that way. Get real please, I’ve been watching since it first aired and I’m not a prude!

Love this show. Been watching it from the first episode. They are like my second family. Love all the cast…thanks for at least another two years.