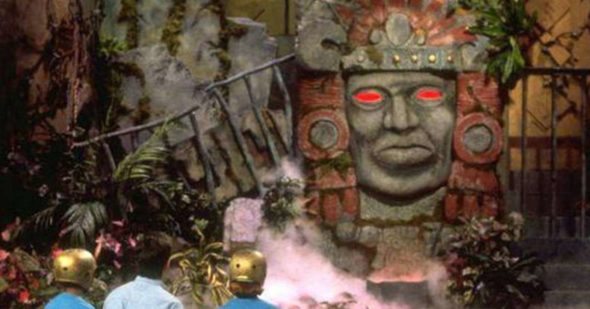 Olmec will have plenty to say about this. The CW is reviving the Legends of the Hidden Temple game show but, this time, adults will be competing.

The original Legends of the Hidden Temple series ran for three seasons on Nickelodeon, from 1993 until 1995, and features six teams (Blue Barracudas, Green Monkeys, Orange Iguanas, Purple Parrots, Red Jaguars, and Silver Snakes) of two kids competing against each other. The object of the game is to retrieve one of the historical artifacts in an ancient Mayan-like temple with Olmec (voice of Dee Bradley Baker), a giant stone head located at the entrance. The teams perform physical stunts and answer questions based on history, mythology, and geography. The program was hosted by Kirk Fogg.

The revival of Legends of the Hidden Temple is expected to air next season and casting is currently underway. Here’s the announcement from The CW:

The Supersized, Adult Version of The Beloved ’90s Competition Series To Preserve Many of The Favorite Elements of The Original

May 11, 2021 (Burbank, CA) – The CW Network has ordered a new, reimagined edition of the iconic Nickelodeon adventure series LEGENDS OF THE HIDDEN TEMPLE, further expanding the network’s alternative programming slate. The series’ premiere date and time will be announced later.

This supersized, adult version of LEGENDS OF THE HIDDEN TEMPLE preserves many of the original Nickelodeon series’ favorite elements, including “Olmec” – the giant talking Mayan head – the “Moat Crossings,” “The Steps of Knowledge,” the “Temple Run,” and of course, the iconic team names: “Purple Parrots,” “Blue Barracudas,” “Orange Iguanas,” “Red Jaguars,” “Silver Snakes” and “Green Monkeys.” Only this time, the entire show is taken out of the studio into a “jungle” and scaled up with tougher challenges and much bigger prizes on the line. Every episode is a hero’s journey through a mysterious jungle. Five teams begin the journey, but only one is “strong enough and smart enough” to enter the ominous Olmec’s Temple, avoid the “dreaded” Temple Guards, retrieve a lost treasure, and return it to its rightful owner.

LEGENDS OF THE HIDDEN TEMPLE, the cherished ’90s Nickelodeon competition show, originally aired from 1993-1995, with repeats airing continuously for nearly thirty years. LEGENDS OF THE HIDDEN TEMPLE holds a special place in millennial hearts — inspiring a movie, mobile games, a board game, and one of the most popular Halloween costumes every year. The award-winning series was inspired by the seminal Nintendo game “The Legend of Zelda” and the “Indiana Jones” movie franchise.

About Stone & Company Entertainment:
Stone & Company and Scott A. Stone have created and produced more than fifty television series including the Emmy(R) nominated series “A Season With” (Showtime) and “BrainSurge” (Nickelodeon), and the multiple award-winning Nickelodeon series, “Paradise Run.” Other cutting-edge programs include iconic classics like: “The Mole,” “The Man Show,” “The Joe Schmo Show,” “Loveline,” “Popstars,” and “Shop ’til You Drop.” Website: www.stonetv.com

About The CW:
THE CW TELEVISION NETWORK, a joint venture between Warner Bros. and CBS, launched in 2006. The CW is a multiplatform network that broadcasts a six-night 12-hour primetime lineup, Sunday through Friday and streams its ad-supported content, free, without login or authentication on CWTV.com and The CW app which is available on every major OTT platform. In daytime, The CW broadcasts a Monday through Friday afternoon block, and a three-hour Saturday morning kids block. The CW’s digital network, CW Seed, launched in 2013, and offers beloved limited-run series, as well as past seasons of recent fan-favorite television shows. For more information about the network and its programming, visit www.cwtvpr.com.

About Nickelodeon:
Nickelodeon, now in its 41st year, is the number-one entertainment brand for kids. It has built a diverse, global business by putting kids first in everything it does. The brand includes television programming and production in the United States and around the world, plus consumer products, digital, location-based experiences, publishing and feature films. For more information or artwork, visit http://www.nickpress.com. Nickelodeon and all related titles, characters and logos are trademarks of ViacomCBS Inc. (Nasdaq: VIACA, VIAC).

What do you think? Did you watch the original version of Legends of the Hidden Temple on Nickelodeon? Will you check out the revival?