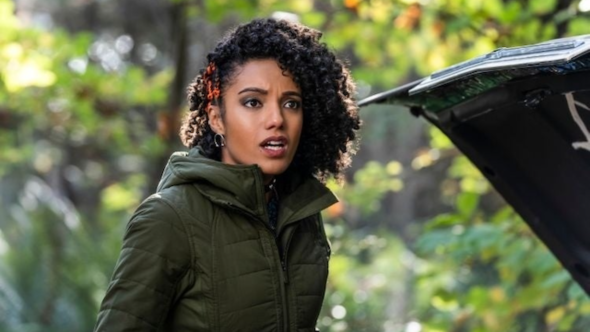 DC’s Legends of Tomorrow is losing a team member. Deadline reports Maisie Richardson-Sellers is leaving the CW TV show ahead of its sixth season.

DC’s Legends of Tomorrow co-showrunner Phil Klemmer says Richardson-Sellers is leaving to create projects of her own:

This was something that was well over a year in the works. We knew that [Maisie] was wanting to make her mark as a filmmaker on her own, and so that allowed us to craft a story that would, hopefully, make for a satisfying conclusion. The finale was sort of all about her. For me, it’s so bittersweet, bringing it back to that punk club and The Smell… The good thing is that people are allowed to come back and have come back.”

The The CW series wrapped its fifth season this week and has already been renewed for a sixth season.

What do you think? Are you a fan of DC’s Legends of Tomorrow? Will you miss Charlie?

Not a fan. Loved most of the other series but Legend is not one of them. Also not a fan of Bat Women or Star girl.

I liked Charlie, but I think they ended her storyline in a nice, neat fashion. I hope everything works out for her in her career, but if it doesn’t she’s welcome to come back in my opinion.

Why don’t they bring back hawk man and hawk girl??? Great character that would bring good story line back into the show!!!

I never really cared for her character. It seemed like they couldn’t decide what role she would play or what personality she would have. I’m glad she’s going on to other projects. I’m also glad to see that we’ll have more time for the core characters.

I will miss Charlie I want to wish her all the luck with her next role and series/film. It will be very interesting to learn who will play Vixen in the new season. I still hope that the Legend and JLA and JSA will encounter the Legend Of Doom or Injustice Society Of America in the new season.

Hi thanks for getting back to me yeah I can understand that and less her I wish her all the best but it won’t be the same for me Charlie had some thing special I hope Charlie will make a guest appearance in sea 6 as it will make my year many thanks Rob ps I know it’s to early to say but do u think Charlie may come back in the future .

Hi there yeah I’m Robbie from London and I love Charlie to bits and going to miss her a lot hopefully Charlie will come back for a couple of episodes in sea 6 we just have to wait and see and keep out fingers cross bye for now a sad Robbie .

They have so many characters on the show, that she was getting little screen time. If she has a chance at something bigger, it’s definitely a good time to make a move.