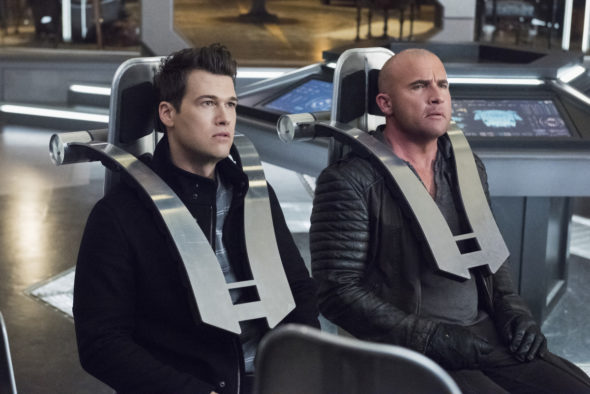 Can the Legends fix the blips? Has the DC’s Legends of Tomorrow TV show been cancelled or renewed for a sixth season on The CW? The television vulture is watching all the latest cancellation and renewal news, so this page is the place to track the status of DC’s Legends of Tomorrow, season six. Bookmark it, or subscribe for the latest updates. Remember, the television vulture is watching your shows. Are you?

Airing on The CW television network, DC’s Legends of Tomorrow stars Caity Lotz, Brandon Routh, Dominic Purcell, Matt Ryan, Nick Zano, Maisie Richardson-Sellers, Tala Ashe, Jes Macallan, and Olivia Swann. In the fifth season, the Legends have become famous and invite a documentary crew onboard the Waverider to film them as they investigate a strange new blip in the Timeline. The Legends discover that their new problems might be tougher to fix than they thought.

What do you think? Are you glad that the DC’s Legends of Tomorrow TV show has been renewed for a sixth season? How would you feel if The CW had cancelled this TV series, instead?

I sure hope it gets a new season. I have started watching with my grandsons since the quarantined and I live it and the time with the boys

Hell, I am glad that DC Legends Of Tomorrow was renewal. I can’t wait to see what happens in the new season. I hope that Legends will rencounter the lesser-known heroes and villain in DC Comics lineup.

i hope there well be a sixth season of the legends of tomorrow because i want to see more of team legends and i want to see a whole lot more of Zaria and her brother..