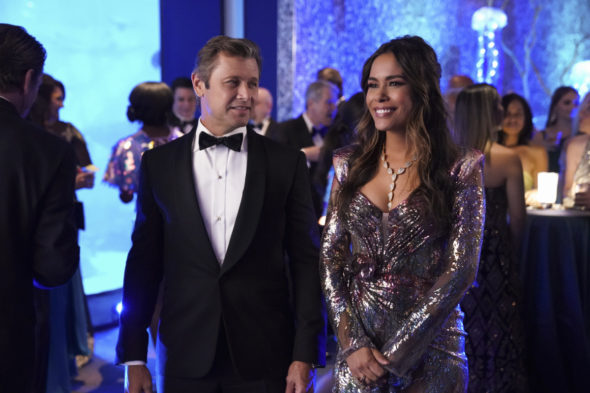 Will this Cristal stick around? Has the Dynasty TV show been cancelled or renewed for a fourth season on The CW? The television vulture is watching all the latest cancellation and renewal news, so this page is the place to track the status of Dynasty, season four. Bookmark it, or subscribe for the latest updates. Remember, the television vulture is watching your shows. Are you?

Airing on The CW television network, Dynasty stars Elizabeth Gillies, Maddison Brown, Sam Adegoke, Robert Christopher Riley, Rafael de la Fuente, Daniella Alonso, Sam Underwood, Adam Huber, and Michael Michele, with Alan Dale and Grant Show. A reboot of the 1981 drama series, this show centers on the wealthy Carrington family and their energy empire which they must defend against the Colbys and other adversaries, as well as from each other. In season three, the Carrington family faces the unknown on all fronts — business, family, and love — with plenty of shocking twists along the way. Blood is thicker than water, but is it more important than oil? That remains to be seen.

The third season of Dynasty is averaging a 0.10 rating in the 18-49 demographic and 358,000 viewers. Compared to season two, that’s down by 35% and 35%, respectively. Find out how Dynasty stacks up against other The CW TV shows.

Will The CW cancel or renew Dynasty for season four? Despite the low ratings, I suspect the show will go on. I’ll keep an eye on the ratings and update this page with breaking developments. Subscribe for free alerts on Dynasty cancellation or renewal news.

1/7/20 update: The CW has renewed Dynasty for a fourth season.

What do you think? Are you glad that the Dynasty TV show has been renewed for a fourth season? How would you feel if The CW had cancelled this TV series, instead?

Please boost your ratings so good looking forward new episodes of it. Never missed any episodes of it. So glad got renewed another season next spring suppose come back return.

I truly love Dynasty …I especially love Elizabeth Gillies ..Some people do not realize that Elizabeth Gillies has an amazing dinging voice ..she has sang in previous shows such as “Sex, Drugs and Rock & Roll” also when she was a teenager on the show “Victorious” The show Dynasty in the past has incorporated Elizabeth’s singing in parts of the series allowing her to sing a episode here and there ..I wish the writers would include more of her singing into the show…every now and then ..God knows she is blessed with the gift of not only acting but also… Read more »

I’m very excited for season 4. I love all the drama and how the show the show represented our society. Our society is corrupted. There are people out their who would do anything for a right amount of money, just so they can satisfy their own childish greed. Money runs the world. In reality, people are backstabbers and turn against one another. Their are shallow and manipulative people. We live in a very judgemental society where the privileged poke at those beneath their status. The fact that Dynasty is honest about how society is really like was my favorite turn… Read more »

GOSH i don’t even know how to put this into words. but let’s start off with that i LOVEEEEE this show it has so many twists and turns and keeps me on my feet! i tell myself i’m only watching one more episode and end up finishing a season! i am so excited for season 4 and can’t wait to see what they come up with. however i would like to see an update on steven. is he alive. is he coming back to the show. and if so will adam then be exposed for the monster he is and… Read more »

Absolutely love this series. Sooo invested in the Fallon & Liam relationship. I cannot wait for season 4!!
I’d love an update on Steven…
Love the new season 3 Alexis, but missing season 2 Krystal though.

Dynasty: It is awesome this SIZZLING presentation on the CW production is renewed again as it is very, very entertaining.

Seasons 1 & 2 were so much better than 3. It is now a sitcom comedy not a drama. Where did Monica go and Dynasty cannot be a show with a Stephen, who no one brings up or visits. So weird.

It’s a wonderful show.Its my favorite please don’t cancel it.

I love Dynasty it’s what I look forward to all week.

As of January 7th Dynasty was renewed for a 4th season