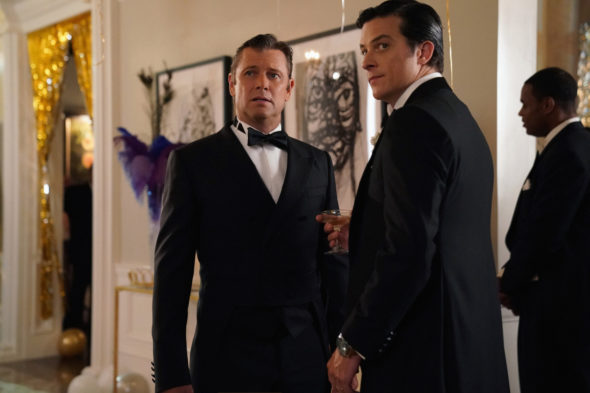 Is it all over for the Carringtons, or have they only just begun? Is the Dynasty TV show cancelled or renewed for a third season on The CW? The television vulture is watching all the latest cancellation and renewal news, so this page is the place to track the status of Dynasty, season three. Bookmark it, or subscribe for the latest updates. Remember, the television vulture is watching your shows. Are you?

The second season of Dynasty averaged a 0.15 rating in the 18-49 demographic and 554,000 viewers. Compared to season one, that’s down by 15% in the demo and down by 19% in viewership. Learn how Dynasty stacks up against the other CW TV shows.

Will The CW cancel or renew Dynasty for a third season? I’m not sure how much the ratings actually matter with this one. The CW’s standards are already low, and a lot of their younger audience watches online or On-Demand. Since the reboot is based on a CBS property and Netflix releases the show internationally, the costs are different as is the reimbursement. For now though, I’ll still keep an eye on the Nielsens and update this page with breaking developments. Subscribe for free updates on any Dynasty cancellation or renewal news.

What do you think? Should the Dynasty TV series have been renewed for season three? How long do you imagine this CW TV show will run?

I want to see Dynasty renewed! Love it

I was really wanting to love this show because it’s creators are the same as Gossip Girl which I love. The first season was okay…but this second season is almost unwatchably boring. Also there is no Chuck and Blair type chemistry. I don’t care about any of the relationships. Fallon and Liam zzzzzzzzzzzzzzzz.

Oh come on..this is the best thing on anyone’s telly at the moment ….it’s ridiculously fantastic …I’d watch a hundred series ..make more and get on with it!!!..it’s brilliant

Please continue to air the show, the actor and actress are a perfect fit,I look forward to watching. We need a season 3 to 15 keep it coming.

I find the show hilariously entertainning. Keeps apart from the constant and predictable contents of the million detectives shows airing in every single network. I see it as an alternative.

Season 3? When? I love the show

They did not deserve it!!! This show doesn’t respect its characters. Destory all!!! It has to be cancelled not renewed… -.-“

The Dynasty should be renewed, I’m looking forward to it. It’s such a nice serial and I can’t see any reason not to be.