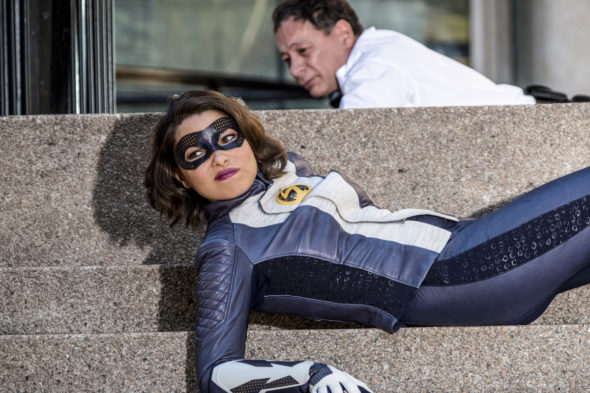 Is Barry still protecting Central City? Has The Flash TV show been cancelled or renewed for a sixth season on The CW? The television vulture is watching all the latest cancellation and renewal news, so this page is the place to track the status of The Flash, season six. Bookmark it, or subscribe for the latest updates. Remember, the television vulture is watching your shows. Are you?

The fifth season of The Flash averaged a 0.61 rating in the 18-49 demographic and 1.70 million viewers. Compared to season four, that’s down by 24% in the demo and down by 23% in viewership. Find out how The Flash stacks up against other CW TV shows.

Will The CW cancel or renew The Flash for season six? I think it will get a renewal. The CW has gone all-in on DC programming and while Arrow is the foundation, The Flash, which was the littlest network’s number one show for its first four years on the air, has been its superstar. For now, I’ll keep an eye on the Nielsens and update this page with breaking developments. Subscribe for free alerts on The Flash cancellation or renewal news.

1/31/2019 Status Update: The Flash has been renewed for season six on The CW. Details here.

What do you think? Should The Flash TV series have been renewed for a sixth season? How many seasons do you think this CW TV show should run?