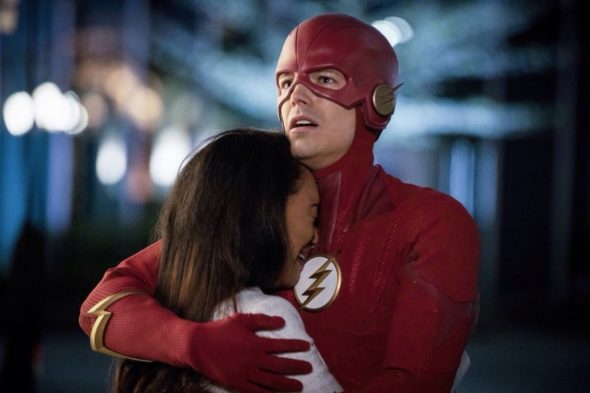 That was fast. The CW has given The Flash TV show an early seventh season renewal with more than half of season six yet to come. Season seven will air as part of the 2020-21 television season.

The Flash stars Grant Gustin, Candice Patton, Danielle Panabaker, Carlos Valdes, Hartley Sawyer, Danielle Nicolet, Tom Cavanagh, and Jesse L. Martin. The action-adventure series centers on police scientist Barry Allen (Gustin) who develops super speed after a dark-matter lightning strike. Behind his mask, Barry uses his powers to protect the people of Central City from many an evil force as The Flash. In season six, Barry has thrown himself into his work following the loss of his future daughter, Team Flash members are dealing with issues of their own, and genius Dr. Ramsey Rosso (Sendhil Ramamurthy) inadvertently gives birth to a new villain named Bloodwork.

The sixth season of The Flash is averaging a 0.51 rating in the 18-49 demographic and 1.38 million viewers. Compared to season five, that’s down by 17% and 19%, respectively. The show continues to be The CW’s highest-rated series in both categories.

Season six of The Flash resumes on February 4th. Season seven will air as part of the 2020-21 television season which kicks off in Fall 2020.

What do you think? Are you a fan of The Flash TV series? Are you glad that it’s been renewed for a seventh season?

Yes! I was super nervous.

They should turn Episodes 20-22 into Episodes 1-3 for season seven.

as a fan of the flash, I seriously hope that the flash will be renewed, I just finished watching season 5 and the last episode left me in tears. I’m waiting for season 6 to be on Netflix so i can binge watch it but after I’m done with season 6, i hope there will be a season 7. if the flash ever gets canceled, I will cry.

I love the tv series

i hope the flash well get renewed for a 7th season and i hope there well be a 8th season the year after that i don’t want the flash to ever get cancelled..

As an older(+50yrs.), fan of MOST of the CW hero shows; I am happy The Flash has been renewed and is able to last as long as the main actors are willing to continue in their leading roles.
Was a huge fan of SmallVille and have all 10 seasons of the show on dvd. Will more than likely get all season of The Flash on dvd also!
Already have the dvd sets upto the season with Norma West Allen (XS) in it as a recurring role.

dont cancel the Flash…. there are still a lot of us that like the show… those that dont can go watch something else… PLEASE keep Barry running…

You should have canceled this Disney show after season 3.

it’s not a Disney show