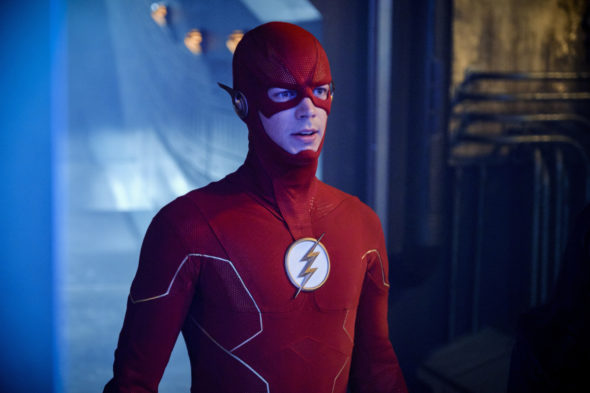 Can Barry outrun destiny in the sixth season of The Flash TV show on The CW? As we all know, the Nielsen ratings typically play a big role in determining whether a TV show like The Flash is cancelled or renewed for season seven. Unfortunately, most of us do not live in Nielsen households. Because many viewers feel frustration when their viewing habits and opinions aren’t considered, we invite you to rate all of the sixth season episodes of The Flash here. *Status update below.

A CW superhero drama that’s based on characters from DC Comics, The Flash stars Grant Gustin, Candice Patton, Danielle Panabaker, Carlos Valdes, Hartley Sawyer, Danielle Nicolet, Tom Cavanagh, and Jesse L. Martin. The action-adventure series centers on police scientist Barry Allen (Gustin) who develops super speed after a dark-matter lightning strike. Behind his mask, Barry uses his powers to protect the people of Central City from many an evil force as The Flash. In season six, Barry has thrown himself into his work following the loss of his future daughter, Team Flash members are dealing with issues of their own, and genius Dr. Ramsey Rosso (Sendhil Ramamurthy) inadvertently gives birth to a new villain named Bloodwork.

What do you think? Which season six episodes of The Flash TV series do you rate as wonderful, terrible, or somewhere between? Do you think that The Flash on The CW should be cancelled or renewed for a seventh season? Don’t forget to vote, and share your thoughts, below.

*1/7/20 update: The CW has renewed The Flash TV show for a seventh season.