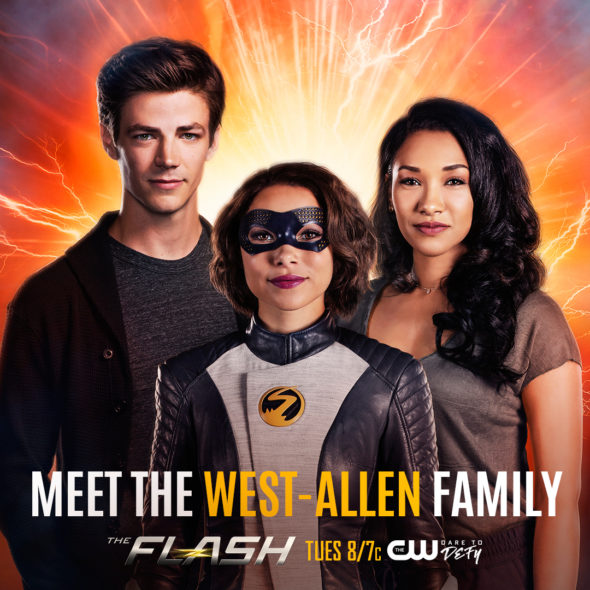 Does the fifth season of The Flash TV show on The CW fly by? As we all know, the Nielsen ratings typically play a big role in determining whether a TV show like The Flash is cancelled or renewed for season six. Unfortunately, most of us do not live in Nielsen households. Because many viewers feel frustration when their viewing habits and opinions aren’t considered, we’d like to offer you the chance to rate all of The Flash season five episodes. **Status update below.

What do you think? Which season five episodes of The Flash TV series do you rate as wonderful, terrible, or somewhere between? Should The CW cancel or renew The Flash for a sixth season? Don’t forget to vote, and share your thoughts, below.

absolutely love THE FLASH!!! after every season ends I go all the back to season 1 and rewatch every episode til the latest season is released. please continue one of my all time favorite shows!! TEAM FLASH

If the writers would compare the original shows with today, the old shows had flavor. This is not to say there is not any today. But why are heroes being increased, and why expose them to all and have them without the mask? I feel the show flash should have the original characters. do w/o profanity. Just my opinion

I truly enjoy the Flash, because it is all about the importance of family and friendship.

I love The Flash. It should be renewed for a 6th season. This is the best CW superhero TV show. I hope it continues.

I am a retired senior citizen, but I love watching The Flash and Supergirleven though it is geared for the younger generation. During the off seasons, my grandson will watch the show from the very first episode to the last episode of the current season. He watches it over and over again, he loves it that much. Please keep this show around for a long time.