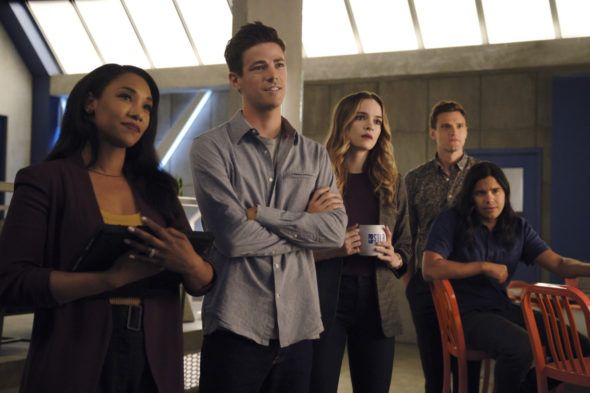 Can Barry and the rest of Team Flash handle what’s to come? Has The Flash TV show been cancelled or renewed for a seventh season on The CW? The television vulture is watching all the latest cancellation and renewal news, so this page is the place to track the status of The Flash, season seven. Bookmark it, or subscribe for the latest updates. Remember, the television vulture is watching your shows. Are you?

Airing on The CW television network, The Flash stars Grant Gustin, Candice Patton, Danielle Panabaker, Carlos Valdes, Hartley Sawyer, Danielle Nicolet, Tom Cavanagh, and Jesse L. Martin. The action-adventure series centers on police scientist Barry Allen (Gustin) who develops super speed after a dark-matter lightning strike. Behind his mask, Barry uses his powers to protect the people of Central City from many an evil force as The Flash. In season six, Barry has thrown himself into his work following the loss of his future daughter, Team Flash members are dealing with issues of their own, and genius Dr. Ramsey Rosso (Sendhil Ramamurthy) inadvertently gives birth to a new villain named Bloodwork.

The sixth season of The Flash averaged a 0.44 rating in the 18-49 demographic and 1.26 million viewers. Compared to season five, that’s down by 28% and 26%, respectively. Find out how The Flash stacks up against other The CW TV shows.

Will The CW cancel or renew The Flash for season seven? Aside from the show’s stong ratings, the CW is committed to DC Comics shows. Since Arrow is ending this season, I can’t see the network dropping another established superhero show during the same season. I’m sure that The Flash will be renewed for season seven. For now, I’ll keep an eye on the ratings and update this page with breaking developments. Subscribe for free alerts on The Flash cancellation or renewal news.

1/7/20 update: The CW has renewed The Flash TV show for a seventh season.

What do you think? Are you glad that The Flash TV show has been renewed for a seventh season? How would you feel if The CW had cancelled this TV series, instead?

I’ve been a huge fan of The Flash since season 1. I think it’s the best series and Grant Gustin is the best Flash there is. The movie Flash on the other hand I think is a disaster, it would have been better to take Grant, he is just awesome. I am glad that there will be a season 9. That is just great.

Have been a big fan of “most” of the CW hero shows since season 1 of SmallVille from way back. currently favorite show is “The Flash” hope it will last as long as SmallVille did, as long as Grant and the rest of the cast are willing. GR

I am very pleased that The Flash will be back for season 7 , I have enjoyed the series from the very beginning, thanks for the great entertainment, Wayne Taylor

Flash isn’t a perfect show it has its problems with the villans, inconsistent writing Etc things like these bring down the show.

I love the flash each season has left me on the edge of my seat the episodes are so exciting like a rollercoaster ride. When its over it’s like no I want more . . I love the characters. I sure hope cysco comes back. It wouldn’t be a team with out him . I cannot wait for season 7. The writers and productions producers my hats off to you. You all are amazing!!

What is there to be worried about? Flash is pretty much invincible ever since they showed he can use Flash Time where only Flash can move it removes all tension why doesn’t barry just use it when its most needed like when Devoe was taking bodies or Cicada? Sure he can’t use it right now in Season 6 because the speed force is gone which was a massive nerf on the Flash’s speed.

I LOVE The Flash!! Please DO NOT CANCEL this fantastic program. I haven’t missed a single episode since it started. The characters are fascinating and so watchable. I love them all.

Me to. I enjoy Grate and MOST of the other key cast members(-1F member). Hope the show last a long time have all current seasons in dvd sets.

Please keep the flash, its such a great storyline and so many characters to build from