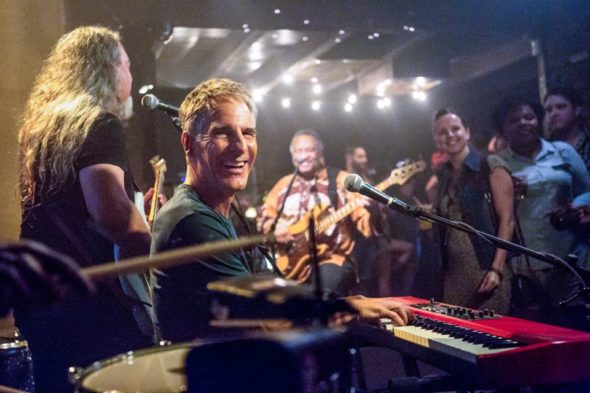 Are things getting any easier in “The Big Easy” for Pride and company in the fifth season of NCIS: New Orleans on CBS? As we all know, the Nielsen ratings typically play a big role in determining whether a TV show like NCIS: New Orleans is cancelled or renewed for season six. Unfortunately, most of us do not live in Nielsen households. Because many viewers feel frustrated that their viewing habits and opinions aren’t considered, we’d like to offer you the chance to rate all the season five episodes of NCIS: New Orleans here. *Status update below.

A military crime drama, NCIS: New Orleans stars Scott Bakula, Lucas Black, Vaness Ferlito, Necar Zadegan, Rob Kerkovich, Daryl “Chill” Mitchell, and CCH Pounder. The series revolves around a highly-trained and unique team of Naval Criminal Investigative Service (NCIS) agents that are stationed out of “The Big Easy”. They are led by Special Agent Dwayne “King” Pride (Bakula), a native of New Orleans who is driven by his need to always do what’s right.

What do you think? Which season five episodes of the NCIS: New Orleans TV series do you rate as wonderful, terrible, or somewhere between? Should CBS cancel or renew NCIS: New Orleans  for a sixth season? Don’t forget to vote, and share your thoughts, below.

I absolutely love NCIS New Orleans. Please don’t cancel this how. It would be a shame to lose it

I watch it every week. Shooting and leaving dead bodys behind still means better rateings.

love NCIS New Orleans it is the best of all the NCIS shows. It woukd be a shame if t were cancelled.

NCIS:New Orleans is the best “Cop” show period. Pride “King” plays a great role, and should win awards for his acting! This show should last @ least 10 seasons or until they wanna hang it up!

This episode reaches into a black hole. The writers must have been struggling with their thought process. If my wife didn’t like the show, I would just read a good book.

NOLA is essentially a great show. It continues to evolve and expand in both character and content. Pride’s character needed more substance to hold viewers attention and that is successfully happening each week in S5. NOLA has the huge advantage and good fortune to have engaged the rare talents of Actor/Producer, Scott Bakula. His abilities stand out both as an actor and for the show in general. There is no part he can’t assume with style and sophistication and his name alone is a notable draw for viewers. Canceling this show would be a big mistake and force viewers to… Read more »

Absolutely – RENEW for season 6 – love this show most of all!

All the NCIS shows are good. Plots and actors are excellent, and it seems like I learn an unknown fact (I do Google them !) almost every show. My favorite, just because I love New Orleans so much, is NCIS New Orleans. However, each show has at least 1 or 2 excellent actors. Linda Hunt & LL Cool J in Los Angeles; Mark Harmon & Rocky Carrol in NCIS; Scott Bacula and CHH Pounder in NOLA are good examples.

Totally agree.. Dont understand why Scott Bakula hasnt gotten an emmy for this yet

Love NCIS and NCIS New Orleans.. Hope they are renewed

NCISNO is the best of all returning/mew shows because of Pride.

Cheryl
Reply to  HELEN A DOYLE

Also, agree with you