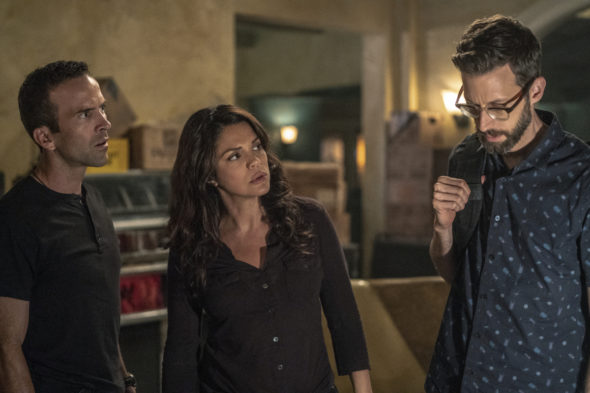 How long will Special Agent Pride and company stay on the case? Is the NCIS: New Orleans TV show cancelled or renewed for a sixth season on CBS? The television vulture is watching all the latest TV cancellation and renewal news, so this page is the place to track the status of NCIS: New Orleans, season six. Bookmark it, or subscribe for the latest updates. Remember, the television vulture is watching your shows. Are you?

Airing on the CBS television network, NCIS: New Orleans stars Scott Bakula, Lucas Black, Vaness Ferlito, Necar Zadegan, Rob Kerkovich, Daryl “Chill” Mitchell, and CCH Pounder. The series revolves around a highly-trained and unique team of Naval Criminal Investigative Service (NCIS) agents that are stationed out of “The Big Easy”. They are led by Special Agent Dwayne “King” Pride (Bakula), a native of New Orleans who is driven by his need to always do what’s right.

Will CBS cancel or renew NCIS: New Orleans for season six? The series is still performing pretty well so I don’t see it being cancelled this time around. I’ll keep an eye on the Nielsens and update this page with breaking developments. Subscribe for free NCIS: New Orleans cancellation or renewal alerts.

What do you think? Are you glad that CBS has renewed the NCIS: New Orleans TV show for season six? How many more seasons do you think this TV series has in it?

Why is NCIS: New Orleans not on the air?

When is NCIS New Orleans returning and what night and time?

Why did cbs change the day its being televised?

I am glad NCIS New Orleans is cancelled because I think those Actors suck! All of them, NCIS and NCIS LA are the best two shows and the Network should have stopped there! Yes its my opinion but its so bad I couldnt watch for more than 5 minutes at a time! I tried several times to try get into the storyline but the Actors you chose really sucked!