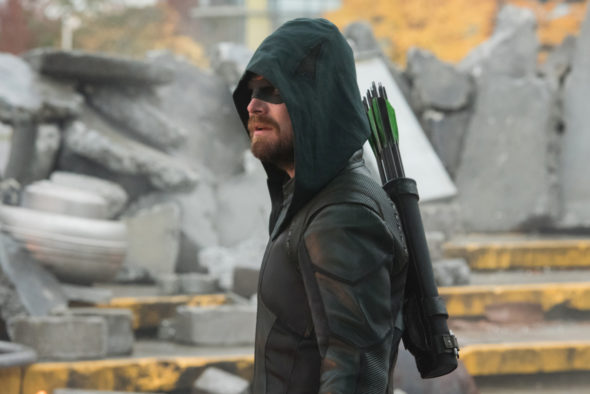 The Christmas holidays are here, and that means a lot of shows are taking a few weeks off. The CW revealed the return dates of their currently airing shows on Wednesday. Shows like Arrow, The Flash and Supernatural will return with brand new episodes in January and February.

Check out the graphic below for the return dates of Supergirl, Batwoman, Riverdale, and more of The CW line up. 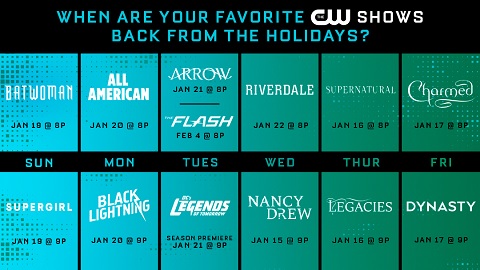 What do you think? Are you excited for the final episodes of Arrow and Supernatural? Will you watch The Flash when it returns after Arrow ends?

Do NOT cancel Flash! It’s my favorite show and I’m a 50 year old woman! It’s not just for millennials!

Just when we have got super heroes back on TV once again now ya are wanting to take them off of TV WHY I don’t understand it. I’m 63 years old and I love all the super heroes shows I wish they were more of them.
Please keep them going on that’s my opinion.
Thank ya! Die hard fan!!!!!

Very upset that Arrow and Supernatural are being cancelled. Arrow is a good show and I don’t see a reason for its cancellation. It would have been nice to see at least one more season with Oliver, Felicity, Mia and William as a family. We never got to see any of that and I feel like you have left us hanging. The ending of Supernatural, I can understand I guess. They have been on for 15 years and I guess they are tired of it and want to try something new. Tho after last year, at the Supernatural conference for… Read more »

Arrow isn’t being cancelled, Its ending. They’ve always wanted to end the show in a meaningful way and Oliver dying in the crossover and Mia having her own show is their way of doing that.

Sorry to see tv show arrow go, really loved the show. But very excited to see Batwoman, Supergirl and Legends of tomorrow up for another season.

As I am sad to see SUPERNATURAL end I’m hoping that CW will still air the re-runs on TV I’m also hoping that this is not the end of it either because as we all know Sam and Dean never stays dead. So hopefully their just taking some needed time off to spend with their friends and family and get some things done and then return.

Legends of tomorrow and ardor actually premier on the 14th

What the heck is “ardor”?

Probably just a typo for arrow

Yeah Arrow and Legends come back on the 14th to conclude the storyline of Crisis.

I’m so very happy to hear that Supernatural has renewed for a last season. I thought it was over this year, yay! I swear, if they keep adding more and more seasons of this show, I would never get bored of it!

Actually it starts back up January 16th, and and the LAST episode, the series finale, is on MAY 18th, 2020.

What are you talking about.. this is the final seasob

This actually it’s the final season, I’m sure cw isn’t going to continue the series or pick up anymore of the stories unfortunately