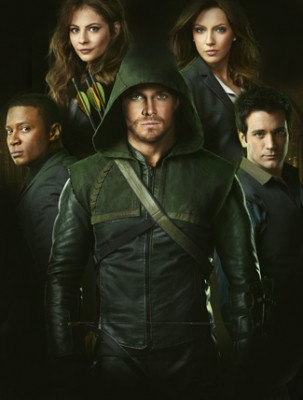 TV show description:
Based on the Green Arrow superhero from DC Comics, this TV series follows the tale of billionaire playboy Oliver Queen (Stephen Amell). After being involved in a violent shipwreck, he’s presumed dead for five years before being discovered alive on a remote Pacific island.

When Oliver returns home to Starling City, he’s welcomed by his devoted mother Moira (Susanna Thompson), his beloved sister Thea (Willa Holland), and his best friend Tommy (Colin Donnell). They sense however that Oliver has been changed by his ordeal on the island. While Oliver hides the truth about the man he’s become, he desperately wants to make amends for the selfish actions he took as a boy.

Most particularly, he seeks reconciliation with his former girlfriend, Laurel Lance (Katie Cassidy). As Oliver reconnects with those closest to him, he secretly creates the persona of Arrow – a vigilante – to right the wrongs of his family, fight the ills of society, and restore Starling City to its former glory.

By day, Oliver plays the role of the wealthy, carefree and careless philanderer he used to be — flanked by his devoted chauffeur and tough-as-nails bodyguard, John Diggle (David Ramsey). While doing this, he carefully conceals the secret identity he uses under the cover of darkness.

Laurel’s father, Detective Quentin Lance (Paul Blackthorne), is determined to arrest this Arrow vigilante that’s operating in his city. Meanwhile, Oliver’s own mother, Moira, knows much more about the deadly shipwreck than she’s let on and is more ruthless than he could ever imagine.

What do you think? Do you like the Arrow TV series? Do you think it should have ended with season eight? Would you have watched season nine?

I really liked the series Arrow. Very good actors in the show. Maybe the writers were running out of ideas & that’s why it was discontinued? If it came back on the air, I would definitely watch it!

I could see them going with a Season 9 as Felicity/oliver’s daughter could wear the mantle as well as the children from Digg. Season 8 was left open-ended and we need heroes in the times we live in real or imagined.

Now is a time that we really need hero shows. I truly believe you are doing our country a dis-service, we are stuck at home and your ending all the shows that give the feeling of hope. Please reconsider. Judging shows by the numbers is not effective anymore. I much prefer binge watching instead of having to wait a week and then forgetting to watch the next show.

Don’t know if there are any Supernatural fans out there – but that is ending too. 🙁

I love Arrow and am sad to see it go. I do not understand why it was canceled because it was a great show. Hope they don’t cancel any more CW shows, I love them all.

The main actor Stephen Amell wanted to leave so they decided to just end it.

I love the Arrow, sorry to see it end.

omg yes I want to see more episodes of the flash.