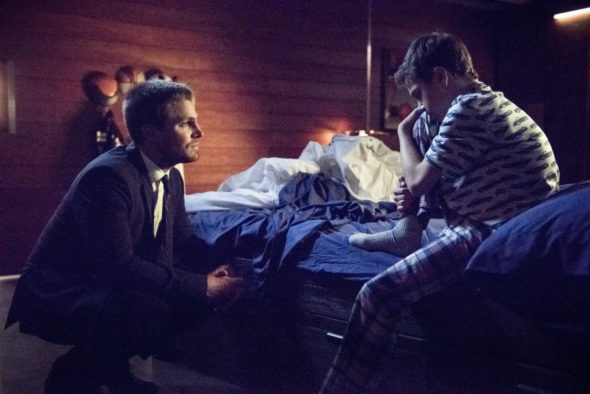 Is Oliver Queen’s aim still true during the sixth season of the Arrow TV show on The CW? As we all know, the Nielsen ratings typically play a big role in determining whether a TV show like Arrow is cancelled or renewed for season seven. Unfortunately, most of us do not live in Nielsen households. Because many viewers feel frustration when their viewing habits and opinions aren’t considered, we’d like to offer you the chance to rate all the Arrow season six episodes here.

What do you think? Which season six episodes of the Arrow TV series do you rate as wonderful, terrible, or somewhere between? Should The CW cancel or renew Arrow for a seventh season? Don’t forget to vote, and share your thoughts, below.

show is terrible, and the crossovers are stupid not everyone watches The Flash, Supergirl, and Arrow i never liked The Flash and stopped Supergirl at end of 2nd season and now im done with Arrow

I really dug Arrow. I do feel the characters that Acebedo and Rene portrayed did not fit the profile of the show.

I often find myself wondering why viewers reject this show. To me it is one of the best TV shows in terms of action, good relationship examples, sensitive writing and horrendous villains.

You guys are down to season 6, SEASON 6!!!! You guys have gone so far to cancel oh pls don’t

Love the show and the actors. Best ever!

This season is just showing us the best version of Stephen smell as green arrow…a simple person…I like this and will.always…moreover olicity love attracts me more to this show…

Renewed 7th season last season ever of arrow tv show but going be on other shows now. Very sad going to the end.

I love this show however do agree the additional team members detract from the original storyline. Definitely needs to be renewed – season 6 hasn’t been my favourite but will definitely take it over cancellation. There is much more to a show than just the ratings

Love this show! Renew it!

Please, please, please keep renewing Arrow forever it’s my favourite show & has been from day one, ignore all the haters out there if they don’t like it then they dont have to watch it but dont spoil it for others who love it,