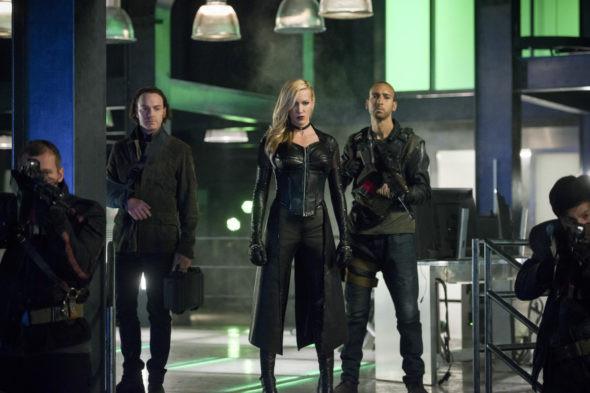 Are Green Arrow and his team the Nielsens’ next targets? Is the Arrow TV show cancelled or renewed for a seventh season on The CW? The television vulture is watching all the latest cancellation and renewal news, so this page is the place to track the status of Arrow, season seven. Bookmark it, or subscribe for the latest updates. Remember, the television vulture is watching your shows. Are you?

Airing on The CW television network, Arrow stars Stephen Amell, David Ramsey, Emily Bett Rickards, Willa Holland, Paul Blackthorne, Echo Kellum, Rick Gonzalez, Juliana Harkavy, and Katie Cassidy. Five years after surviving a ship-wreck in the South China sea, billionaire playboy Oliver Queen (Amell) returns home a changed man. Now, disguised as the Green Arrow, he’s back in Star City and bent on fighting injustice and righting his family’s wrongs. Although Oliver has solidified his crime-fighting force, enemies from his past return to threaten it, leaving him to reconsider his relationships with his chosen family.

The sixth season of Arrow averaged a 0.43 rating in the 18-49 demographic and 1.27 million viewers. Compared to season five, that’s down by 31% and down by 28%, respectively. Learn how Arrow stacks up against the other CW TV shows.

Will The CW cancel or renew Arrow for season seven? Despite sizable, sustained ratings declines, Arrow still does very well for the network. I suspect The CW will renew Arrow for a seventh season. Maybe that will be the end but I tend to doubt it. I’ll keep an eye on the Nielsens and will update here as appropriate. Subscribe for free updates on any Arrow cancellation or renewal news.
4/2/18 update: The CW has ordered a seventh season of Arrow for the 2018-19 season. Details here.


What do you think? Are you glad that the Arrow TV show has been renewed for a seventh season? How would you feel if The CW had cancelled this TV series, instead?

Unfortunately this show has gone backwards after season 2, now everyone is an expert with a bow and arrow and like Flash, Supergirl and LOT its gone too PC. no wonder people are tuning out.

Are you kidding? I love the show of Arrow. I’ve watched it many times. I miss Sarah and laurel. I wish they’d come back. I’d watch this show forever. More seasons needed.

I’m so happy and can’t wait for season 7. I been watching pass season all throughout the summer. I would be absolutely devastated if I didn’t come back. I would have to start a companion #save green arrow just like we did for Lucifer.

Whoever wrote this, according to your own website (the Cw show ratings) The viewership only declined by 0.28% not 28%. Fix it. Lol

Please please please renew arrow for a seventh season if you don’t I will be broken, hurt, and have no reason to live

Arrow needs a 7th season. It needs to be allowed this for the many fans that make this show there number one to watch. Please renew it and give us one more season in Star City

It needs to end, it is no longer a superhero show but an immature adult angst soap opera, season 1 set the pace but after that it died.

I think Arrow should go well into a season 10 or further. My husband & I watch it faithfully. I personally like Oliver. I like him so much I actually call the show Oliver instead of Arrow. Thanks for listening.
Mary Kelly

My entire family loves the Arrow! We would hate to see it canceled! We have kids of all ages who enjoy it.

I love Arrow and am watching it a second time. I am 77 yrs old and have a crush on Stephen Amell

I also love the Arrow show and I am 74 and how could you not love Oliver/Stephen Amell. He is not only handsome he is an awesome person and family oriented man!!!